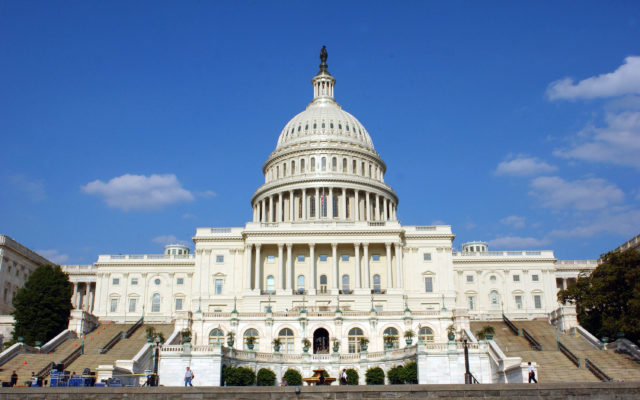 WASHINGTON — The three Democrats from Iowa serving in the U.S. House have issued written statements indicating they support the move to begin an impeachment inquiry of President Trump.

Iowa’s Republican U.S. Senators — Joni Ernst and Chuck Grassley — accused Democrats of trying to overturn the results of the 2016 election.

Iowa’s Fourth District Congressman Steve King, a Republican, said in a video statement that the impeachment inquiry is “vicious…unpatriotic” and “puts the constitution at risk” by trying to unseat Trump. Iowa GOP chairman Jeff Kaufmann said Democrats are “delusional” and Kaufmann tweeted that first-term Congresswomen Axne and Finkenauer are ignoring the wishes of voters. Trump won Iowa’s first and third congressional districts by four points in 2016.

The Iowa Democratic Party has not issued a statement, but the written statements from Loeback, Axne and Finkenauer were re-tweeted by the party’s Twitter account. The liberal group Progress Iowa did comment, saying it’s time to impeach the president.

“I have felt the need to proceed judiciously given the high constitutional requirements of impeachment, but President Trump’s actions and obstruction require this step of establishing an impeachment inquiry. It is unfortunate that we have ended up at this point. The American people deserve the full truth and it has reached the point where there is no other way to get the necessary information and an impeachment inquiry is justified.”

“When I was sworn into office, I took an oath under God to support and defend the Constitution of the United States. Using the Oval Office to pressure a foreign leader to investigate a political opponent is a clear abuse of power. Beyond an abuse of power, allegations that the President threatened to leverage U.S. taxpayer dollars to extort a foreign government, if true, constitute an unequivocal violation of our federal laws and the U.S. Constitution I swore to defend.

“For the sake of our national security and our democracy, these serious allegations require independent Congressional investigation unobstructed by this Administration. Congress has a responsibility to uphold the rule of law and to take appropriate steps to open an impeachment inquiry.

“If the President, as he has said, has nothing to hide, then he should allow the whistle blower to provide the full complaint to House and Senate Intelligence Committees. I look forward to reviewing the full transcript of the President’s call tomorrow and hearing from the Acting Director of National Intelligence later this week, where I expect him to provide all relevant information so Congress can make an informed decision.”

“I have always supported Congress and our House committees in defending our democracy and Constitution. The impeachment inquiry requested today is needed to continue that work. It’s imperative we stand up for our country and hold those accountable who hurt our democracy.

Whether Republican or Democrat, there’s no question that a president who threatens a foreign leader and our national security for their own personal gain, and uses taxpayer dollars, to do it is not upholding their constitutional responsibilities.

While the appropriate committees do their work, I will not be distracted from my top priorities of continuing to uplift the needs of Iowans, as we’ve been doing from day one, focusing on common sense solutions to lower the cost of prescription drugs, bringing much needed investment to our crumbling infrastructure, and having the backs of our farmers left behind by an administration that values big oil over renewable fuels. We must stay focused and we must continue to do our jobs to move our country forward.”

“The president said he will release tomorrow the full, unclassified transcript of his phone call with the Ukrainian president. That level of transparency is extraordinary from any White House. The leadership of the Senate intelligence committee is also working to do its part and hear from the alleged whistleblower and intelligence officials.

“Unfortunately, instead of waiting to learn the facts by reviewing that transcript or hearing from the whistleblower, Democrats have moved straight to starting the impeachment process. Democrats have been searching for any reason to impeach President Trump since his inauguration because they couldn’t accept the results of the 2016 election.

“This all reeks of hypocrisy considering former Vice President Joe Biden has already said he used his office and taxpayer dollars to pressure Ukraine’s president into taking specific law enforcement actions that directly benefited his son. The attention on unverified reports instead of an on-record admission shows why Americans are so distrustful of politicians and the media.

“If Democrats use impeachment proceedings as a basis to not act on policy that will directly benefit Americans like the USMCA or lowering prescription drug prices, that would prove they’re more interested in politics and opposing the president at all costs than serving the American people. For my part, I’ll continue focusing on the issues that affect the everyday lives of Iowans. I hope my Democrat colleagues return to doing the same for their constituents.”

“House Democrats have spent more than two years—since the morning of November 9, 2016—engaging in antics to undermine President Trump. The fact that they are pushing for impeachment is no surprise, as their motives have always been crystal clear. The Senate Intelligence Committee, in a thoughtful and bipartisan manner, is doing its job and looking into the claims by the whistleblower, and I support that effort. Shame on the House Democrats if they use impeachment as an excuse to play politics instead of focusing on issues that affect the livelihoods of Iowans across our state.”

RPI Statement on House Democrats’ Impeachment Inquiry
DES MOINES — Republican Party of Iowa Chairman Jeff Kaufmann issued the following statement regarding House Democrats’ impeachment inquiry and support from Reps. Cindy Axne and Abby Finkenauer, who represent Trump +4 districts:
“Nancy Pelosi and the delusional Democrats have made it very clear — they are hell-bent on erasing the votes of millions of Americans and derailing Pres. Trump’s re-election efforts. Pelosi even admits that their latest call for impeachment is simply because they are desperate to defeat this President. Axne and Finkenauer are the deciding votes in Pelosi’s plan, and they will stop at nothing to overturn the will of their constituents who voted for and strongly support President Trump.”

“On inauguration day, President Trump swore to uphold the Constitution. Since that day, he has taken nearly every chance to break his oath.”

“The constitution prohibits a President from profiting from the office. This President flagrantly promotes his businesses and even encourages foreign officials to stay at his hotels.”

“Past Presidents have been impeached for obstruction of justice. This President attempted to fire the person investigating him, and prevent justice being done.”

“Federal law prohibits campaigns from asking for anything of value from a foreign country. This President admitted to soliciting political assistance from the Ukraine, by investigating one of his political opponents.”

“It is unconscionable that the President of the United States is inviting an attack on our democracy by a foreign government. He has broken the law, and must be held accountable.”

“We support today’s decision by Speaker Pelosi to move forward with an official impeachment inquiry. We have to uphold the rule of law, and it is time to impeach President Trump.”