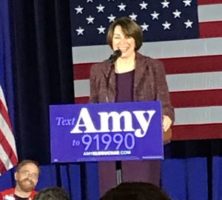 DES MOINES —- Four of the 14 Democrats in the race for their party’s 2020 presidential nomination campaigned in Iowa Thursday.

Amy Klobuchar told a crowd in Sioux City her fundraising picked up after the December debate.

“We’re seeing a total surge that’s allowed us to double our staff in the state of Iowa and double our field offices,” said Klobuchar, whose campaign had not yet released its fourth quarter fundraising report. “…We’re adding people in South Carolina and Nevada as well as New Hampshire.”

Tom Steyer has embarked on a bus tour of the state and one of his stops Thursday was at a grocery store in Manning that will close soon. Bernie Sanders, also traveling by campaign bus, held a forum on the Meskwaki Settlement.

“Native American people have educated our country and once again we’re going to need your leadership to show this country and maybe the world about how we go forward respecting the environment,” Sanders said, “…that we can’t destroy nature and expect to live good lives.”

Sanders won the precinct on the settlement near Tama during the 2016 Caucuses. Joe Biden spoke to a crowd in Anamosa, suggesting Trump is like a shell game swindler at a traveling carnival.

“Next time they come through town, you go, ‘Whoa…I’m not sure I want to play that game,’” Biden said. “Well, Donald Trump has shown his hand.”

A woman in the crowd later told Biden she decided to attend the event at the National Motorcycle Museum because her son had died in a motorcycle accident four years ago and yesterday was his birthday.

“And I thought I’m going to get to spend a little time with somebody who understands this heartache,” she said.

A CBS reporter posted the video online, showing Biden gave her a hug and asked how she was doing. Biden’s son, Beau, died of brain cancer in 2015 and Biden recently noted the 2020 Iowa Caucuses will be held on what would have been Beau Biden’s 51st birthday. Biden’s first wife and a daughter were killed in a 1972 car crash and he often encounters people on the campaign trail who tell him of their own bouts with grief.

== Steyer will be in Mason City on Saturday at the MacNider Art Museum at 11 o’clock, while Sanders will appear at the Music Man Square in Mason City Saturday night at 6:30.