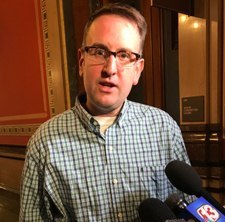 DES MOINES — “Logan’s Law” is a step closer to becoming law. The bill is nicknamed after a 15-year-old Charles City boy, Logan Luft, who died in an ATV accident in July 2017, and promotes organ donation by allowing people to sign up as organ donors on Iowa hunting and fishing licenses. Five of Logan’s major organs were donated after the accident.

House Democratic Leader Todd Prichard of Charles City helped introduce the bill in the legislature earlier this session. Prichard told members of the House on Tuesday that he had a conversation before the funeral with Logan’s father, who is a close friend, and was amazed about what he learned from the conversation.  “In the middle of this tragedy — if you knew Logan, he was just a wonderful young man, as are his siblings — you knew what just a loss this loss of his son to our community was. So we talked, and I didn’t find tragedy for my friend Lenny but I found hope, and he explained the process of organ donation and how they were so happy that this donation was going to expand and be used for the legacy of Logan. I was just overwhelmed, I was just overwhelmed.”

Prichard says Logan’s father approached him about nine months later, saying he learned that Minnesotans were able to put organ donation as a option on their hunting and fishing licenses and asked if Iowa could do the same.  “What this gave me as a friend who was also grieving for the loss of this bright young man was a way to help my friends. Now through this generosity of Logan and through his generosity of giving, you all now with your vote are also part of that circle of spreading this gift. Now we bring education and opportunity to other people who may be affected with this tragedy and we give them that opportunity to find their hope in the middle of a tragedy like we have.”

The Iowa Senate unanimously passed the bill in mid-February, while the House approved it this week on a 98-0 vote. It must go back to the Senate due to a slight change in the language in the bill. Once that’s approved, it will head to Governor Reynolds for her consideration.