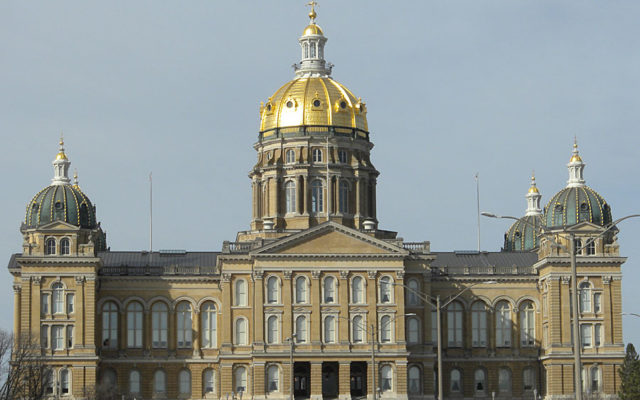 DES MOINES — Two Republican senators have advanced a bill to limit the kind of flags that may be flown over public schools and government buildings in Iowa. The proposal comes after a pink, white and blue “Transgender Pride Flag” was flown over the Iowa capitol in November. Republican Senator Roby Smith of Davenport sponsored the bill and discussed it during a subcommittee hearing at the capitol.

“We have to draw lines in this building all the time and we’re drawing a line and saying that the American flag, the Iowa flag and the (Prisoner of War) flag,” he said.

If the bill becomes law, those are the only three flags which may be flown over schools as well as city, county and state buildings. Senator Tony Bisignano, a Democrat from Des Moines, opposes the bill. Bisignano said he went online and found a lot of people he called “homophobes” who objected to the pink flag flying over the Iowa Capitol on Transgender Remembrance Day.

“I don’t understand the disturbance with people that have a problem with the recognition of a day for pride and I don’t mean that in (just) gay pride, ” Bisignano said. “I mean that in pride of anything.”

Senator Jake Chapman of Adel, a Republican, said flags at public buildings should be about patriotism and unification.

“If we go down this path of allowing all these different flags to fly, we will run into a situation where we’re all uncomfortable, perhaps (people would request) the KKK flag or white supremacy or the Nazi flag (be flown) and so if it’s okay for one, it’s okay for the other,” Chapman said. “…We have to draw that line.”

The bill is now eligible for debate in a full Senate committee. Officials at the state universities are seeking some exceptions. “The concern is about the football stadiums where they have numerous flags” Big 12, Big 10, all the affiliations with the conferences,” said Carolann Jensen, a lobbyist for Iowa State University.

Only one group — the Iowa Association of Labor — is registered in opposition to the bill.The transgender flag flew over the capitol for about five minutes in late November at the request of an organization called Iowa Safe Schools.