Board of Education delays action on rules for seclusion rooms 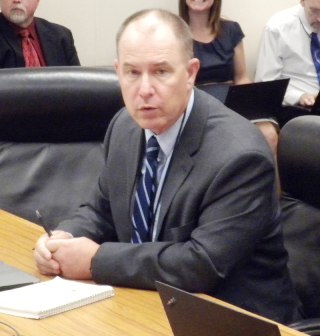 DES MOINES — The State Board of Education Thursday voted down proposed new rules for using restraints and seclusion rooms for students in a procedural move to allow them to make changes.

There are still concerns about how to determine if behavior is serious enough to warrant punishment, how big seclusion rooms should be, and how long it should take to notify parents of the punishment.

The board decided to vote down the rules so they can hold some more meeting statewide for input, and then make changes and allow for another public input period before final adoption.

The board heard public comments before the vote, including those from Winterset Superintendent Susie Meade, who favored keeping things the way they are.

“I hear this from all of my colleagues from throughout the state. Folks, this is an epidemic and we need to be providing teachers with tools to support students —  not limiting the few resources we have available to assist students when they are struggling  to regulate their behaviors, dealing with mental heal…or dealing with the impact of trauma,” Meade says.

Meade says the manual for such issues used to be a half-inch thick and now it is 60 pages long. “What makes me really sad is we have fewer outside resources to support our students than we had 20 years ago  — yet many more expectations and regulations,” according to Meade.

ACLU lawyer, Daniel Zeno, says his group and others pushed for changes and he wants to see them move forward. “And the reason is because we know this happens to kids in schools in Iowa. And it happens disproportionately to black kids and to kids with disabilities,” Zeno says. “The point of the petition was to reduce the use of the rooms.”

He says the rules don’t take anything away from teachers. “The rules do not completely ban them. They are still allowed to be used  — they just are limited. And we think that is a good thing,” Zeno says. “It is a traumatic experience for a kid to be put in what is essentially solitary confinement.”  Zeno had a few suggestions for changes to some of the wording the proposed rules.

Department of Ed Deputy Director Dave Tilly says they did their best to improve the rules — but says each district is different and there’s not a single solution.

“It depends on the facts of the situation and we’re covering such a wide potential waterfront of behaviors that the challenge is writing rules that in fact address those and but leave to the good judgment of the practitioners, decisions they have to make,” Tilly says.

He leads the Division of Learning and Results and says they can go out across the state and hear from more people on the changes. “We’ve already spent two years working on these rules, and I don’t anticipate there will ever be a place where we will come where everyone will fully agree,” Tilly says, “but our intent here given the importance of these is to get them right.” Tilly says.

Department of Education lawyer, Nicole Proesch says everyone has worked hard to come up with the revised rules. “It was all respectful, and even though we didn’t come to a complete consensus — as you can see from the public comment — there are people on all sides of the issue. The department really did try to come down to a compromise,” Proesch says.

Proesch says the Board of Education had to take the action it did to be able to revisit the rules and revise them without starting over again.   They will now look at moving forward with the changes and the added public input process.