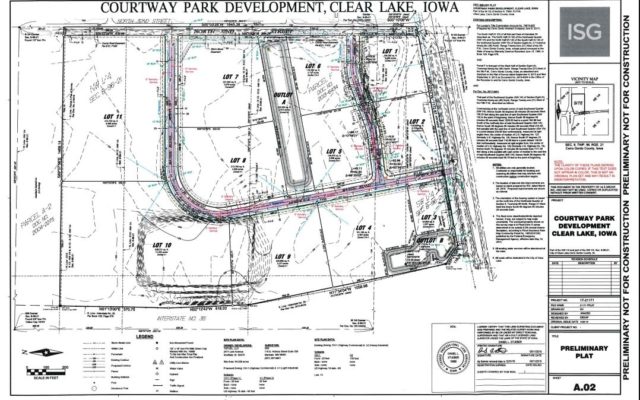 CLEAR LAKE — The Clear Lake City Council Monday night approved the final plat for the Courtway Park Subdivision on the east side of the community, and it was announced that a letter of intent for a potential development agreement between the city and the developer to assist with a hotel and conference center project will likely come before the council next month.

The 64-acre tract of land previously was Andrews Pre-stressed Concrete, located just north of State Highway 122 between Interstate 35 and North 32nd Street. The southern portion of the property will have six lots zoned as “highway commercial”, with the northern portion having five lots zoned as “light industrial”.

The proposed hotel and conference center development would be on a 5.8 acre piece of land on the far southwestern part of the subdivision. City Administrator Scott Flory says the project would be a $16 million investment.  He says the hotel would be not less than a mid-scale brand hotel with not less than 70 rooms. “It would also entail a five to six thousand square foot restaurant with an estimated 180 person capacity, an approximately 9000 square foot conference meeting center that would be capable of accommodating somewhere around mid range of about 600 persons, so depending upon seating arrangement could be could be a less and more. Generally arranged maybe a 450 to 900 persons, kind of concentrating it be around that 600 person of the midpoint there.”

Construction on the hotel and conference center would begin in October of this year with a scheduled completion date of October 31st in 2020. Flory says the city would rely on the new anticipated property and sales taxes generated from the hotel and conference center development, as well as other future developments in the subdivision, to help offset a city economic development contribution to the project.  “We would anticipate a forgivable loan to the project in the amount of between $3.75 and 4 million towards the project as a 10 to 12-year forgivable loan, and that would be premised on the whole project being built and completed by that October 31st 2020 date. Upon completion of the project, the city would provide the loan funds to the developer, not an upfront loan, but once the project is completed, then the loan funds that would be provided.”

Flory says he believes the prospective project would be the most significant of its kind between Ames and Owatonna on Interstate 35.  “I think it’s got the great potential to be catalystic for not only the Courtway Park but Clear Lake in general and north Iowa in particular. We’re fortunate to be able to have some good developers involved with this project that have a good strong track record, and we’re looking forward to hopefully making a deal come to fruition with them and making project happen here”

Flory says the project will have a positive economic impact on the community. “I think this is a great example of how a community can use tax increment financing to benefit the entire community here by really facilitating the creation of a what I would refer to the project as an economic impact generating opportunity that can help bring outside dollars into the community without creating new cost for the taxpayers. I think it’s a complex, complicated project, but I think it’s very realistic for a community. I think that said those are things that we have to concentrate on.”

Old Dominion Freight Line has already announced they plan to use one of the lots for a $5 million capital investment, creating up to ten full-time jobs, for what’s commonly referred to as a “cross dock” or “less than truckload” distribution facility.