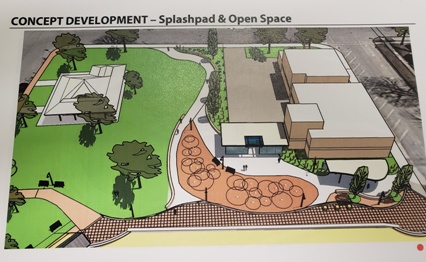 CLEAR LAKE — The City Council in Clear Lake Monday night set the date for a public hearing on the proposed plans and specifications as well as the date for the bid letting on the first phase of the City Beach Enhancement project.

While this phase of the project does not include the construction of a new splash pad and restroom facilities, City Administrator Scott Flory says a number of things will take place.  “Phase one includes: construction of water main, both finished and raw  improvements; demolition of existing pump shed located on city property that is adjacent to the city’s Water Treatment Plant building, and which houses the DNR lake aerator pumps and associated equipment; construct a temporary shed that would house the aerator pumps over the course of the winter, generally those are operated from a December through March timeframe; and then demolition of the existing restroom structure.”

The council last night also approved a 28E intergovernmental agreement with the Iowa Department of Natural Resources to house the lake aerator pumps and equipment inside the temporary facility this winter and then in the permanent structure starting in 2020.  Flory says the DNR had a handshake agreement with the city since the 1980s for the existing pump shed on city property. “They had approached the council, and it was basically just a motion to allow them to put that shed there, and put the aerator pumps in, no formal agreements or anything like that. When we reached out to them to have this meeting to talk about this project and the need to remove that aerator building and that we would incorporate into the new restroom project these aerator pumps for them. They were pretty happy to have the opportunity to really get that arrangement more formalized in terms of an actual written agreement.”

The estimated costs for the first phase base bid is $230,000, plus the unit price for contaminated soil removal and replacement has been estimated at about $29,250 if needed. The proposed date for the bid letting is September 12th, with the council holding the hearing on the plans and specifications as well as awarding the contract at their September 16th meeting. The project has an anticipated construction start date of September 24th with the completion date of Thanksgiving, with the aerator pumps being operational by November 15th.

THE COWBOY BALL IS COMING TO THE NORTH IOWA FAIRGROUNDS!