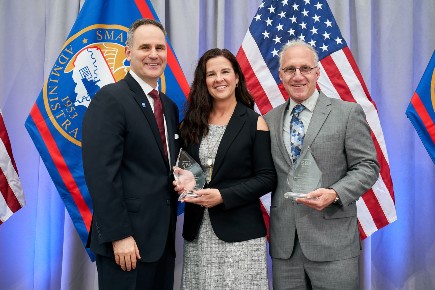 WASHINGTON DC — A couple from Clear Lake has been honored as the first runner-up in this year’s National Small Business Person of the Year contest.

Brad and Angie Barber of Cabin Coffee Company were honored on Monday by the U. S. Small Business Administration at their annual National Small Business Week ceremony. The Barbers opened their first Cabin Coffee location in 2002 and grew the company to sales of $5.5 million and a staff of 140 by 2017.

They received a Small Business Administration loan to open their second location in Mason City in 2009 and got another loan in 2017 that helped cover construction costs for their new distribution and franchise support center in Clear Lake. There are now 15 Cabin Coffee franchise locations throughout the United States.

This year’s National Small Business Person of the Year award went to Jeff and Jennifer Herbert of Superstition Meadery in Prescott Arizona.