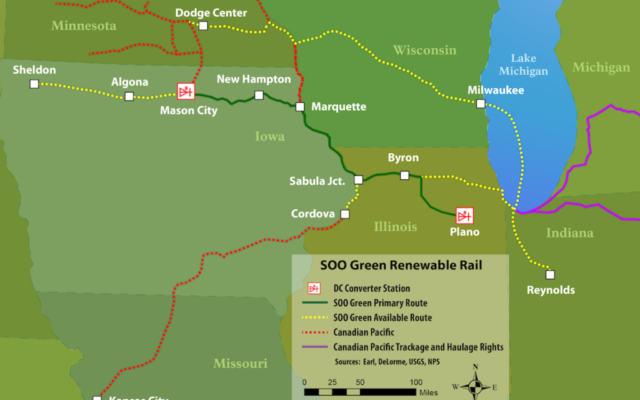 Direct Connect Development spokesman Craig Schoenfeld says the goal is to take the renewable energy being produced in Iowa to markets out east. “We’re looking at developing an underground transmission line starting at about Cerro Gordo County, through eight counties in northeast Iowa and across Illinois, that will eventually wind up in the Pennsylvania-New Jersey grid for companies and consumers to utilize Iowa’s wind energy.”

Schoenfeld says the project’s construction methods will limit impacts to land owners and to the environment by boring under sensitive habitat, limiting the impact on birds and other endangered species.  “The goal of that is that there’s a natural infrastructure that exists currently, and we want to utilize that to minimize the impact on the environment and the landowners, and we think that’s the right way to do that by putting it underground through an existing corridor.”

Schoenfeld says existing infrastructure between Chicago and the east coast will take Iowa’s renewable energy out to those who want to use it.  “Commercial companies, whether it’s Facebook, Google, Amazon or whoever, are increasingly looking to purchase green energy, wind, solar and the like, and be able to utilize that and market as they so choose in their company profiles. We’re looking to tap into that. We believe the market place exists currently, the demand is there currently, and our goal is to move it from point A to point B, and what lacks is that transmission infrastructure.”

Schoenfeld says the project will be a boost to renewable energy production in north-central Iowa.  “Not only for existing production that is currently there but for potential new investment in wind and solar as the market dictates. The market exists, it’s not necessarily here in the Midwest. We have the abundance to have the ability to produce it, and now by creating the infrastructure to move that product where that higher demand is, we think that’s going to be good for both the producers as well as the consumers.”

Schoenfeld says they hope to start the project in about 18 months, with a completion date of 2024. A similar project stalled three years ago when the Rock Island Clean Line withdrew its plans for a $2 billion, 500-mile overhead transmission line that would have taken wind energy across 16 counties from northwest Iowa into Illinois.