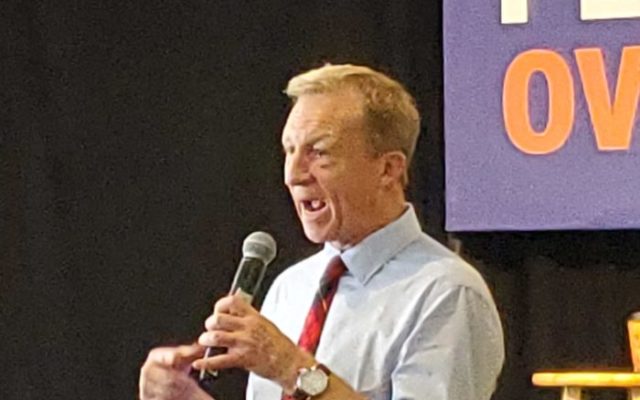 Steyer says after going door-to-door and talking with people for the last seven years that it’s clear in his mind that people do not know what it means to be an American, with personal tensions rising high.  “If you look at the level of anxiety and depression in this country, as an American to me it’s shocking. There’s no doubt in my mind that it’s correlated and caused by the election of Donald Trump. This is not something I’m making up, all the statistics say the same thing. There’s has been a spike in anxiety and depression in the United States because we don’t know what we’re doing, we don’t know what we stand for, we don’t know why we’re on the Earth.”

Steyer says the trade wars Trump has gotten the US into have hurt American businesses and farmers.  “We’re in the state of Iowa — he has been terrible for Iowa, and someone has to go and say ‘you sir are a fraud, you are a fake, you are bad for Americans in terms of the economy, you failed just the way you failed in business, and we are your most recent Atlantic City casino project’ which by the way all failed. It’s hard to believe.  He is a business person who went bankrupt in the casino business. That’s impossible to do by the way. Think about it, you set the odds.”

Steyer spoke to a crowd of about 75 gathered at the MacNider Art Museum.