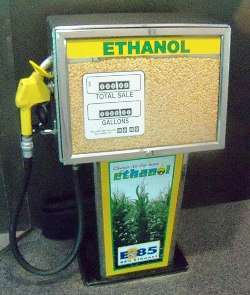 WASHINGTON — Environmental Protection Agency (EPA) Administrator Andrew Wheeler released the details today (Friday) of the Trump administration’s agreement on how much ethanol will be blended with gasoline.

Wheeler says the agreement for what’s known as the Renewable Fuel Standard (RFS) will address concerns about blending exceptions given small oil refineries. “By averaging the last three years of what the small refinery program takes and propose going that much higher than 15 BILLION gallons — so at the end of the day we net out at least 15 BILLION gallons or higher. So that the corn farmers, the ethanol producers have the certainty that they need,” Wheeler says.

Around 30 ethanol and biodiesel plants nationwide have either temporarily or permanently shut down in recent weeks — including four plants in Iowa — because of the uncertainty caused by the waivers. Wheeler says this plan should help them. “For next year we are putting a projection for the small refinery program into the requirements on the refinery side for what they have to blend,” Wheeler says, “and that way at the end of the day for 2020 we will have at least 15 BILLION gallons of corn ethanol.”

Wheeler says there are other things happening that will also help ethanol producers. “We also continue to export more ethanol as well. So the export market is growing — we did the E-15 earlier this year — which is going to allow higher blends of ethanol to be sold nationwide,” Wheeler says.

Grassley, a Republican and a member of the Senate Agriculture Committee, says the president is “fighting for the farmer.”  Grassley says, “President Trump delivered for Iowa, the farmers, the biofuel producers, and in the end, helping the entire country to be more environmentally good.”

The solution outlined today (Friday) by the Trump administration is exactly how the  R-F-S, is meant to function, according to Grassley.  “Since taking office, President Trump has listened to the concerns of farmers and biofuel producers,” Grassley says. “Now, he delivered a victory that will ensure the integrity of the R-F-S is maintained for years to come.”

While the R-F-S mandates that certain amounts of ethanol need to be blended into gasoline, the Trump administration granted 85 waivers to refineries, freeing them of the ethanol requirement. Grassley says the plan will “fix E-P-A’s exemption process and help farmers and biofuels producers going forward.”  “You can grant all the waivers you want to grant but the law provides for adding back in gallons lost,” Grassley says. “So, basically, that’s what this does.”

“This is welcome news for Iowa’s farmers and the renewable fuels industry. President Trump listened to our producers’ concerns and took action to address them. This is what happens when farmers, biofuels producers and government leaders work together to make our voices heard. We are grateful to President Trump for directing EPA to uphold the intent of the Renewable Fuel Standard, and we look forward to working with EPA and USDA to implement today’s announcement. As the number one producer of ethanol and biodiesel in the country, Iowa is proud to lead the nation in reducing our dependence on foreign oil. We will continue to work to restore and build demand for these critical markets for Iowa agriculture.”