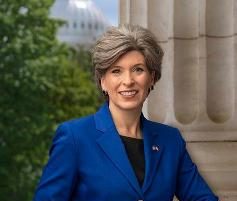 TEMPLETON — Republican Senator Joni Ernst on Thursday said it’s too early to say whether it was improper for President Trump to ask Ukraine to investigate former Vice President Joe Biden and his son, Hunter Biden.

“We can’t determine that yet,” Ernst said during a town hall meeting in Templeton. “We have information that will be presented to the Senate Intelligence Committee.”

President Trump’s decision to put a hold on military aide to Ukraine and Trump’s conversation with Ukraine’s president are now the subject of an impeachment inquiry in the U.S. House. Ernst yesterday joined Republican Senator Chuck Grassley of Iowa in calling for the whistleblower involved to be protected and Ernst said the Senate’s investigation of the whistleblower’s complaint will be handled by the Senate Intelligence Committee.

“They will call in the witnesses as necessary and it’ll be done in a bipartisan manner and a fair process,” Ernst said, “and they will evaluate that.”

Amy Haskins of Manning asked Ernst when congress would decide “enough is enough” when it comes to Trump.

“You still stand there silent and your silence is supporting him and not standing up,” Haskins said to Ernst and some in the crowd applauded.

Ernst told the audience congress does not yet have “the full story” and it’s too early to reach any conclusions.

“I have traveled to Ukraine,” Ernst said. “…Many years ago, I had the opportunity to meet President Poroshenko and one of the issues that I spoke to him about is the fact that in Ukraine there is still a large amount of corruption and they have tried to deal with that corruption. They need to continue dealing with corruption. I don’t care where it is. I don’t care who it is, when it is. Corruption is corruption and it should be combated.”

Earlier this week, Ernst posted a video on Twitter, saying Iowans want Congress to focus on moving the country forward rather than focusing on the “impeachment circus.” Gene Langel, a Republican from Templeton, said he’s not surprised to see an impeachment inquiry in the House.

“The Democrats are trying to drive (Trump) out and between that and the press, I don’t know, most presidents wouldn’t be able to stand all the pressure,” he said after the forum.

Ernst is making her way through north-central Iowa this morning, speaking at the Mason City Chamber of Commerce’s “Breaking Glass” series this morning before visiting Hoover’s Hatchery in Rudd.