Forecasts show corn & soybean harvests may be better than expected 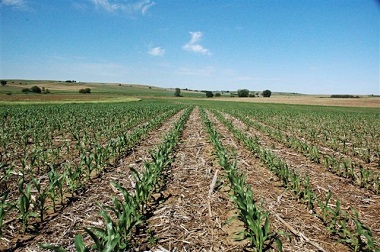 Despite weather challenges, the latest U-S-D-A crop report shows farmers planted more acres than expected this year and corn and soybean harvests may end up being larger than earlier predictions. Still, Iowa Farm Bureau Federation economist Sam Funk says it’s too early to know just how well the corn planted late in the spring due to cold, rainy conditions will actually do at harvest time.

Funk says, “If we have any sort of an estimate later on that rocks those yields lower, I think it would potentially move markets again.” The U-S-D-A’s August report, released on Monday, did not have good news on the demand side. Exports are expected to remain down and so is the amount of corn used for ethanol.

Iowa State University ag economist Chad Hart says China is buying far fewer U-S soybeans than it used to, while Brazil and other South American countries are stepping in to fill the void.

“The U.S. has now slid into that #2 spot when we look at country production,” Hart says. “Brazil has probably taken the top spot and will likely hang onto it for some time.” That could translate to a long-term loss for American farmers, many of whom are already struggling financially.