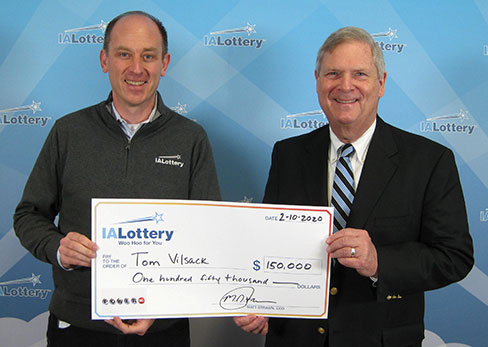 Vilsack won his prize in the Powerball drawing on January 22nd, when the game’s jackpot had grown to an estimated $347 million dollars.

Vilsack told Lottery Officials he will play when the jackpots get big. “When I was a kid my dad liked to gamble from time to time and taught me sort of the rules of the road,” Vilsack says. “So, occasionally when the Powerball gets above $250 million dollars, I think what the heck, you can dream.”

He says he plays for fun. “I also know that the chances of me winning anything are next to none, and so the money is going to go to educations or veterans, the state fund for natural resources or infrastructure, and all the good things that the Lottery does. So, I figure it’s a nice contribution,” according to Vilsack. “I was at the local Hy-Vee on Hickman (in Waukee) and I had just won on a scratch ticket — a ten-dollar scratch ticket for 200 bucks — and I thought ‘well I’m playing on house money’, so I ordered ten numbers.”

Vilsack was just one number away from winning that night’s jackpot, matching four of the five white balls and the Powerball. He had purchased the multiplier that multiplies the prize by the Powerplay number — which was three — and upped the prize to $150,000. Vilsack says he didn’t immediately know he had won.

“The drawing was on Wednesday, I forgot about the ticket. I woke up ten days later on a Saturday morning and I said, ‘Oh, geez, I wonder how I did?’,” Vilsack recalls. He checked the numbers and found out he’d won something.
He says he looked first at the Powerball and as he kept going he determined he had all but one number. “I said, ‘My gosh, I got every number but one!’ Then it was, well, geez, when you get every number but one, surely they’ve got to give you like ten bucks or something.’”

Vilsack has plans for the money. “The church is going to get a little bit of it, St. Boniface, I’m going to send that check out today. And the kids are going to get a little bit because you always try to help your kids out. And then the rest is going to go to my banker,” Vilsack says. “And he’s going to be very pleased to get it. Because we still have an outstanding mortgage from many years ago and this will help pay it down to the point where retirement can be a little bit more comfortable than it might have otherwise been.”

Vilsack is a Democrat who also served as U.S. Ag Secretary for eight years under President Obama. Vilsack is now the president of the U.S. Dairy Export Council.