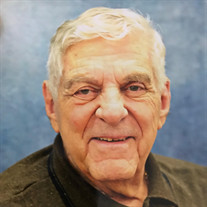 Jolas was elected as the community’s mayor in November 1969, serving from January 1970 until his resignation from office in February 1973 due to a business opportunity.

Jolas was a vocal proponent for making sure the construction of Interstate 35 went through Cerro Gordo County and for the Avenue of the Saints to be routed through north-central Iowa and connect with I-35.

Jolas was the deputy director for what was then known as the Iowa Development Commission in the late 1980s during Terry Branstad’s second term as governor. He served as the agency’s administrator of the Division of Planning and Policy, helping to form the state’s first comprehensive blueprint for economic development.

Jolas in 1987 helped to form the Cerro Gordo County Compensation Board, which determines the pay for elected officials, and sat on the board until 2016.

The Hogan-Bremer-Moore Colonial Chapel says Jolas died Monday night at the age of 87. Visitation will be held from 4:00 to 6:00 Friday afternoon at Hogan-Bremer-Moore in Mason City with a Trisagion service to be held at 6:00. The funeral service will be held on Saturday morning at 10 o’clock at the Holy Transfiguration Greek Orthodox Church.