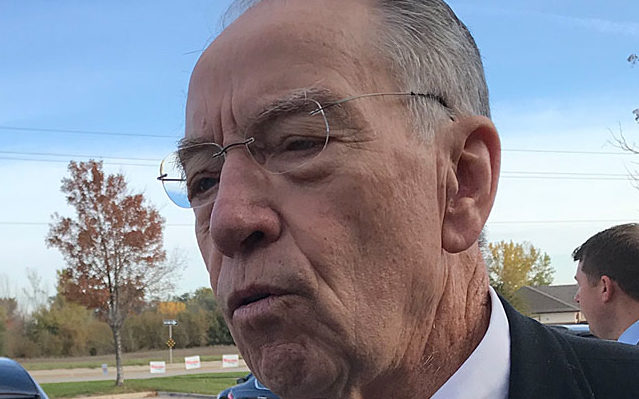 WASHINGTON — Republican Senator Chuck Grassley is responding to a newly-published allegation against the man confirmed a year ago to a seat on the U.S. Supreme Court, saying there was an “incredibly thorough” investigation of Brett Kavanaugh’s personal and professional life.

“I know because I had a team of dozens of lawyers and investigators chasing down each allegation that we received,” Grassley said during a speech on the Senate floor.

Grassley was chairman of the Senate Judiciary Committee last fall and led the confirmation process for Kavanaugh. The New York Times this weekend published a new allegation against Kavanaugh from a man who attended Yale at the same time as Kavanaugh. Grassley said the newspaper has now reported the woman who was allegedly the target of Kavanaugh’s advances does not remember the incident.

“You can’t believe these things unless they’re corroborated,” Grassley told reporters this morning.

“The Constitution’s pretty clear on impeachment being for treason, high crimes and misdemeanors and Kavanaugh hasn’t commited any of them,” Grassley told Iowa reporters this morning on a conference call. “…Doesn’t it show ignorance of the Constitution, calling for impeachment?”

Grassley yesterday said New York Times editors should engage in “serious self-reflection” about their decision to run the article.

“The sad consequences of this article are a misinformed public, a greater divide in our discourse and deeper lack of faith in our news media,” Grassley said on the Senate floor.

Grassley, during his short speech yesterday, said he welcomes scrutiny of his work and considers journalists to have a valuable role as the “police” of our democratic system.”

Some Democrats have called for an independent review of the way Senate Republicans and the FBI handled allegations about Kavanaugh during the confirmation process last year.