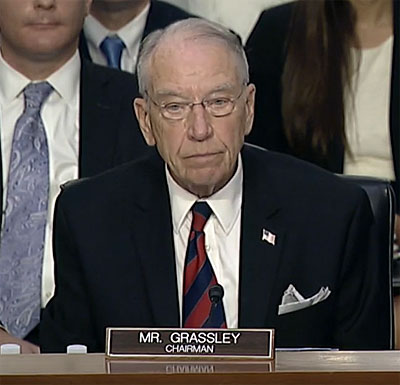 The president’s spending plan reportedly calls for a 31-percent reduction in funding to the Environmental Protection Agency. That’s $2.8 billion, and Grassley isn’t sure he’d support that deep of a cut. “We have to rely on EPA to make sure that we have the enforcement of our clean water and clean air laws and other environmental laws,” Grassley says. “I want it to be able to do its job.”

Trump’s budget also calls for another $8.6 billion for the border wall. Grassley notes the president has already amassed a significant amount of money for the wall in the previous appropriations bill, in addition to the money he was able to transfer under existing law. “That brings it up to about $4-billion and then another amount of money, about $2.5-billion, he declared a national emergency to get,” Grassley says. “I don’t know whether the courts are going to allow him to use the national emergency money. We’ll have to wait and see what the courts say.”

Grassley, a Republican, says he doubts the president could spend the money that’s already allotted for the wall before Congress can make a decision on putting up yet another eight-billion-plus. That said, Grassley emphasizes he does want security improved on America’s southern border.  “I’m for border security because I don’t want criminal elements coming to our country,” Grassley says. “That could be MS-13 gangs. It could be drug kingpins peddling poison to our people. It could be sex trafficking. It could be human trafficking.”

It may be the result of a physical barrier with walls and fencing in some places, electronic surveillance in others, and more border patrol and personnel in still other areas — Grassley says it’s all under the heading of “border security” and it isn’t necessarily a two-thousand-mile-long wall. “The 98% of the people that come here illegally, crossing our southern border, they are probably coming for good reasons to improve their life,” Grassley says, “but they’re still violating our law and I don’t think we have to tolerate people violating our law.”

As for the overall Trump budget of $4.75 trillion, Grassley says, “Presidents propose and Congress disposes.”