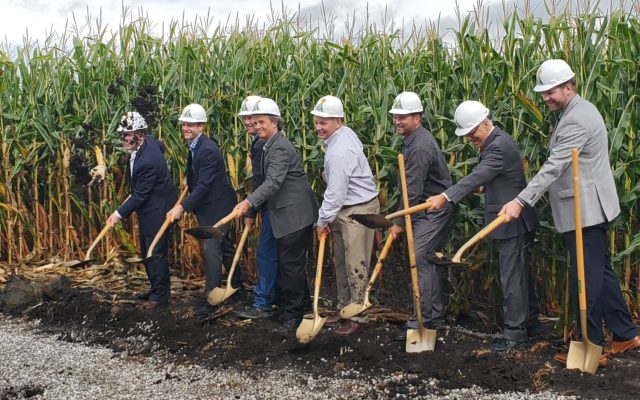 Bushel Boy Farms of Owatonna produces hydroponic tomatoes, meaning that they are grown without soil but instead using mineral nutrient solutions in a water solvent. Bushel Boy is placing the new facility on an 80-acre development south of 43rd Street Southwest and east of Pierce Avenue. The $35 million development will include a 16 to 17 acre greenhouse along with a 50,000 square foot packing house that is expected to bring about 50 full-time jobs to the area.

Bushel Boy president Steve Irland says it’s been a multi-year process to bring his company to Mason City, which he says was an attractive site for the company.  “The available land, the available utilities, the great governmental support in terms of figuring out solutions to problems, and most importantly the citizenry of Mason City. It’s a skilled, knowledgeable, hard-working group of people that we’re looking forward to having an employment relationship with.”

Irland says work on the site south of 43rd Street Southwest near Alliant Energy’s facility is underway and is the first of three phases for the project. “We’re pushing dirt right now more than anything else. Over the course of the rest of 2019, we’re going to prepare the site and get the footings in for a 16-and-a-half acre greenhouse which is Phase One of what we hope will eventually be 50 acres of greenhouses. Next year in the spring, we will start the actual construction of the greenhouse, complete that in September, we will plant our crops about eight to ten weeks after that. The first of November we hope to have tomatoes that were able to ship right out of this facility to grocery stores, food commissaries, hospitals, schools, everybody else who will enjoy locally-grown Mason City tomatoes.”

Irland says they grow three specific types of tomatoes — vine-on tomatoes, beefsteak tomatoes and  snacking tomatoes.  “What makes these really special is we use seeds that predominantly are developed to deliver flavor. A lot of the growers that are in Canada and Mexico and places like that go for yield and the ability to ship tomatoes thousands of miles to far away places. We don’t have to do that, we only ship to a nine-state area surrounding Northern Iowa. Our tomatoes taste like a garden tomato, so they’re really something special. We’re sure the people are going to love them. They can find them right now in their HyVee stores here in Iowa and surrounding states.”

State officials recently approved a Revitalize Iowa’s Sound Economy grant of up to $555,000 to assist in the expansion of South Monroe Avenue to provide primary frontage access to not only the Bushel Boy facility but also for potential other developments.