Hampton-Dumont, CAL students to be provided basic supplies for free this year 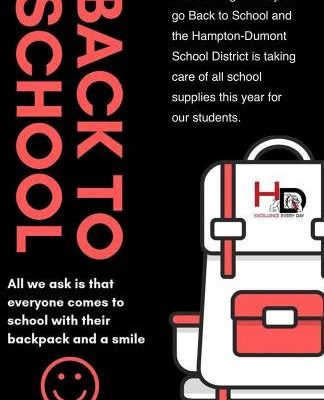 HAMPTON — The Hampton-Dumont and CAL Community School Districts have announced they’ll be providing all of the basic school supplies for every student this school year.

Superintendent Todd Lettow says it’s the continuance of his belief that education should be the great equalizer for kids. “We have probably between 55 and 60% of our students who are on free and reduced lunch. A couple years ago we started with saying that we’re not going to charge registration fees. You know, everything with textbooks, the laptops and iPads that kids get to use, we’re not going to charge for those. We want all kids to have that access. We did away with that, and I think this was another step in that direction in terms of just saying ‘we want you know the kids to have either the same access throughout the district’.”

Lettow says he doesn’t like it when some kids feel like they don’t have as much as others. “Some kids can go out by the fancy folders with all the, I think of Pokemon and those different things on there, and other families can’t afford that, or you know, a 24 pack of crayons versus 64, and then you have kids that want the 64. We just want to equalize all of that and then just really have the kids be focused on why they’re at school learning and have that equal opportunity.”

Lettow says both the Hampton-Dumont and CAL school boards approved funding the program, with some area businesses and non-profits also helping defray the costs.  “We have so many people, whether it’s businesses that collect school supplies, we also have nonprofits, churches, those kind of things that are willing to chip in, and then followed by when we can buy in bulk, we can get those things so much cheaper. With all of those factors, we just decided let’s go ahead and do this, and all the kids have to come to school with is a backpack and a smile.”

Lettow says the cost of school supplies can even be a burden to those who can afford to buy them.  “Even if parents don’t qualify for free and reduced lunch, if they have two or three kids, that’s quite a bite out of there their budget that only happens once a year, and this way we can deflate that feeling as well.”

The first day of school in the Hampton-Dumont and CAL school districts is August 23rd for 5th through 12th graders and August 26th for the rest of the students.