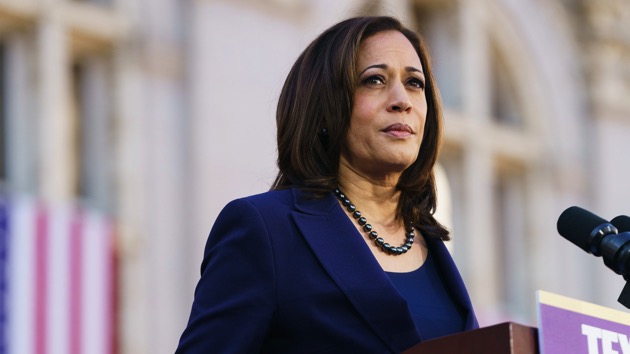 Democratic presidential candidate Kamala Harris has been saying the country is at an “inflection point” for the past year. Now, Harris is trying to steer her campaign toward a higher finish in Iowa’s Caucuses.

Harris spent the past five days campaigning in Iowa, traveling from Sioux City to Burlington, picking up an endorsement from former Iowa Democratic Party chairwoman Sue Dvorsky along the way.

“Her advice has been know the state, travel the state,” Harris said. “…Hopefully getting to places where otherwise there may not be an airport there, but there are people there — people who deserve to be seen and heard.” Harris spoke with Radio Iowa on her campaign bus, discussing an inflection point in her own life. Harris failed the California bar exam on her first try in 1989. “It really required a lot of introspection from me about the importance of taking something seriously and working hard for it and not assuming that you’re going to get it done,” Harris said. “And that’s a lesson I’ve carried with me my whole life.”

Harris often mentions her late mother as the inspiration for doing rather than talking. “She’d say to me all the time: ‘Kamala, you may be the first to do many things. Make sure you’re not the last,’” Harris said. “She’d say: ‘Don’t you ever let anyone tell you who you are. You tell them who you are.’” Harris mentions her mother in the campaign ad that began airing in Iowa this week, along with what Harris calls her “three a.m. agenda” to address Americans’ economic insecurities.

Harris was a prosecutor before she was elected attorney general of California. She was elected to the U.S. Senate in 2016. On the campaign trail this year, Harris has borrowed Barack Obama’s “turn the page” phrase from late 2007, adding a twist targeting President Trump.

Last night, Harris was endorsed by the Asian and Latino Coalition of Iowa. Many of the Democratic candidates attended the group’s forums this past year. Harris visited three times, dropping by the group’s fundraiser this past Saturday night.