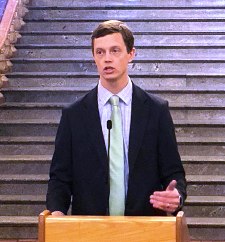 Sand said Wednesday he’s notified the Iowa Department of Human Services that Amerigroup and UnitedHealthcare are not abiding by contract requirements that ensure services are not disrupted for clients.

Sand says he was notified that home services are ending for two unnamed people in rural Iowa receiving in-home care who fear they may be placed in nursing homes.

As state auditor, he says he has a right under the contracts to seek information from the insurers to see if they’re following the law and contract language. Sand says the companies have not complied.

Spokesmen for the two companies did not immediately reply to messages.

A spokesman for Gov. Kim Reynolds declined to comment, and the DHS spokesman says the agency is reviewing the issues Sand is raising.