A majority of Iowa experienced unseasonably dry conditions during the reporting period with the driest conditions across the state’s southern half; rainfall departures were between 1.00-1.25 inches. Temperatures were near normal across much of Iowa with sections of the state reporting slightly warmer than average conditions. The statewide average temperature was 75.3 degrees, 0.6 degrees above normal.

Partly to mostly sunny conditions were seen statewide Sunday (7th) afternoon with light variable winds. High temperatures were in the low to mid 80s, near to slightly below average by one to two degrees. Overnight lows into Monday (8th) were in the mid to upper 60s. Pleasant conditions continued through the day as a large dome of high pressure sat over the Great Lakes. A southerly wind pushed highs into the mid 80s under mostly clear skies. A line of showers and thunderstorms in advance of an approaching low pressure system brought light rainfall to a few counties in southwest Iowa; totals at ranged from 0.03 inches in Holly Springs (Woodbury County) to 0.16 inches at a station in Council Bluffs (Pottawattamie County).

Thunderstorms re-fired on Tuesday (9th) ahead of a warm front during late morning and continued into eastern Iowa during the late evening. There were two reports of an isolated, weak tornado in Scott County. Rainfall totals at 7 a.m. on Wednesday (10th) were highest across northern and eastern Iowa with Rock Valley (Sioux County) reporting 1.35 inches. Three stations in Clinton County reported totals from 0.85 inches to 0.87 inches. A cold front moved through Iowa on Wednesday bringing light showers to southwestern Iowa. Spotty showers popped up in eastern Iowa later in the evening. Rain totals for the day were generally under 0.10 inches. Northwest flow kept highs in the upper 70s and low 80s.

Dry conditions returned on Thursday (11th) with seasonable temperatures under sunny skies. The average statewide high was 85 degrees. Thunderstorms returned to Iowa on Friday (12th), some of which were severe. There were two reports of one inch hail at Hawarden and Maurice in Sioux County. The storms stayed in western Iowa and dissipated after sunset.

A complex of thunderstorms moved into Iowa in the early morning hours on Saturday (13th) bringing another round of locally heavy rainfall. Higher totals were reported from stronger storms with Mapleton (Monona County) reporting 1.05 inches. Conditions were nice for the rest of the day with partly to mostly sunny skies. High temperatures remained seasonal, in the low to mid 80s; 90s were reported across southern Iowa. Overnight temperatures into Sunday (14th) were in the low to mid 70s, averaging six degrees warmer the normal statewide.

Weekly rainfall totals ranged from no accumulation at multiple south-central and southeastern stations to 1.75 inches in Cherokee (Cherokee County). The statewide weekly average precipitation was 0.30 inches, which is less than one-third of the normal, 1.05 inches. The week’s high temperature of 93 degrees was reported on the 13th in Donnellson (Lee County), Lowden (Cedar County), Muscatine (Muscatine County) and Osceola (Clarke County). These readings are on average seven degrees above normal. Elkader (Clayton County) and Stanley (Buchanan County) reported the week’s low temperature of 54 degrees on the 13th, seven degrees below average. 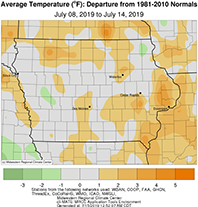 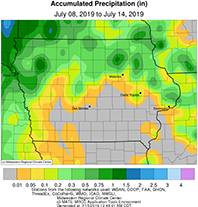