“After several days of sweltering heat and limited precipitation, the crops got the rain they needed last weekend,” said Secretary Naig. “Farmers are very grateful for the mild temperatures forecasted over the next several days.”

Iowa farmers had 5.0 days suitable for fieldwork during the week ending July 21, 2019, according to the USDA, National Agricultural Statistic Service. There were some reports of crops lying flat and green snap in corn due to high winds produced from various storms throughout the state. Fieldwork activities included spraying and harvesting hay and oats.

Thunderstorm activity was present across Iowa on nearly every day of the reporting period with much of the state reporting above average rainfall. A large dome of high pressure over the Midwest also brought very hot conditions, including triple digit heat indices Wednesday through Friday. The statewide average temperature was 79.6 degrees, 4.5 degrees above normal. Iowa experienced spotty showers and thunderstorms during the afternoon and evening on Sunday (14th) with Dubuque Lock and Dam (Dubuque County) reporting 0.53 inch of rain. High temperatures were in the upper 80s and lower 90s with the average high at 90 degrees, five degrees above normal.

Light rain showers formed across northern Iowa into Monday (15th) morning with only a handful of stations reporting measurable totals. Tuesday (16th) was a sunny and breezy day with winds out of the south. High temperatures were in the mid to upper 80s, one to two degrees above average. Moisture from the remains of Tropical Storm Barry helped thunderstorms form across Iowa’s northern half around midnight. The storms consolidated into a well-organized squall line that propagated from northwestern Iowa to the southeastern corner during the daytime hours on Wednesday (17th). There were several reports of severe straight-line winds across nine counties in northwest and southeast Iowa; Harlan (Shelby County) and Mediapolis (Des Moines County) observed 70 mph wind gusts.

A line of storms re-fired around midnight and extended into central Iowa early Thursday (18th) morning. Much of Iowa received measurable rainfall over the 24-hour period ending at 7 a.m. with multiple locations experiencing torrential downpours from stronger storms, especially across northern and south-central Iowa. Osage (Mitchell County) reported 2.60 inches while Rathbun Dam (Appanoose County) observed 1.98 inches. Statewide average precipitation was 0.70 inch, 0.54 inch above average. Temperatures varied from cooler than average in locations along the path of the squall to above average in southern and eastern Iowa.

As Thursday progressed, the band of thunderstorms gradually dissipated. In the absence of cloud cover and rainfall, highs were able to reach into the 90s, creating uncomfortable conditions. Overnight lows remained in the 70s across the state with pockets of low 80s in southwestern Iowa. The average minimum statewide temperature was 74 degrees, 11 degrees above average.

Saturday (20th) was an active weather day with severe straight-line winds reported across 29 counties as a system of strong thunderstorms moved through Iowa. A majority of the state reported measurable rainfall, ranging from 0.10 inch in Dubuque (Dubuque County) to 1.95 inches in Knoxville (Marion County).

Light rain continued into Sunday (21st) morning in southern Iowa as a cold front moved through the state, bringing much cooler conditions. Weekly rainfall totals ranged from 0.11 inch at Fulton (Jackson County) and Le Claire Lock and Dam (Scott County) to 4.91 inches at Estherville Municipal Airport (Emmet County). The statewide weekly average precipitation was 1.51 inches while the normal is 1.01 inches. The week’s high temperature of 99 degrees was reported on the 19th in Little Sioux (Harrison County), 13 degrees above average. Sibley (Osceola County) reported the week’s low temperature of 56 degrees on the 21st, four degrees below average. A maximum overnight low of 81 degrees was reported on the 19th at airports in Davenport (Scott County) and Ottumwa (Wapello County); these readings were 16 and 18 degrees above average, respectively. 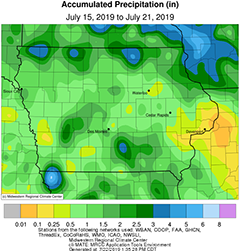 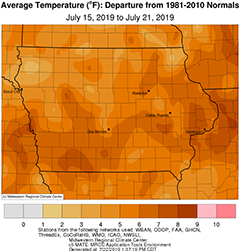