Iowa farmers continued to experience abnormally dry field conditions across most of the State during the week ending August 11, 2019, according to the USDA, National Agricultural Statistics Service. Statewide there were 5.9 days suitable for fieldwork. Fieldwork activities included spraying fungicides and insecticides and harvesting hay and oats.

Pasture condition declined for the sixth straight week and rated a season low 46 percent good to excellent. There were no major livestock issues reported this past week.

Unseasonably dry conditions continued for the third consecutive week across most of Iowa during the reporting period. The southwestern two-thirds of the state reported rainfall deficits between 0.50 inches to one inch. Temperatures were generally seasonable with departures of one to two degrees above and below average in western and eastern Iowa, respectively. The statewide average temperature was 72.8 degrees, 0.80 degrees above normal.

Partly to mostly sunny conditions prevailed over Iowa Sunday (4th) afternoon with a light southerly wind. High temperatures reached the mid 80s. Isolated thunderstorms popped up in north central Iowa during the early morning hours of Monday (5th) ahead of a line of strong thunderstorms that sped through much of Iowa’s eastern half during the afternoon into the late-night hours. Some storms produced severe straight-line winds in northern Iowa. An EF-1 rated tornado was also reported southwest of Dubuque (Dubuque County) causing damage to corn, trees and houses along its path. Much of the northeastern two-thirds of the state reported measurable rainfall; totals ranged from 0.01 inches in Lowden (Cedar County) to 1.68 inches in Stanley (Buchanan County) with the statewide average rainfall at 0.28 inches.

Tuesday (6th) and Wednesday (7th) were generally quiet as a high pressure system sat over the Midwest. Parts of western Iowa experienced light rain on both days with totals under a tenth of an inch. Highs were in the low to mid 80s, a degree or two warmer than average.

Isolated showers and thunderstorms popped up in central Iowa during Thursday (8th) morning with a brief downpour on the opening ceremonies of the 160th Iowa State Fair in Des Moines (Polk County); a total of 0.22 inches was reported near the fair grounds. Higher rain totals were found in east-central Iowa with Newton (Jasper County) reporting 0.42 inches and Montezuma (Poweshiek County) observing 0.40 inches.

Pleasant conditions returned to the state during the afternoon and into Friday (9th) as a weak cold front pushed out of southern Iowa. Highs were in the upper 70s across northeastern Iowa while the rest of the state experienced the 80s. Rain showers pushed into northwestern Iowa during the evening hours and remained into Saturday (10th) morning. Additional thundershowers popped up in north-central Iowa and moved east in two rounds into the afternoon hours. Daytime temperatures were slightly warmer than average, generally in the mid to upper 80s. A system of showers and thunderstorms moved into southwestern Iowa early Sunday (11th) morning. Rain totals, reported at 7:00 am for the previous 24-hours, were mostly under one inch and in the range of 0.10 – 0.50 inches; Underwood (Pottawattamie County) reported 1.00 inch.

Weekly rainfall totals ranged from no accumulation at multiple stations within a band across south-central Iowa to 2.87 inches in Eagle Grove (Wright County). The statewide weekly average precipitation was 0.49 inches while the normal is 0.96 inches. The week’s high temperature of 92 degrees was reported on the 5th in Muscatine (Muscatine County), seven degrees above average. Cresco (Howard County) reported the week’s low temperature of 49 degrees on the 9th, nine degrees below average. 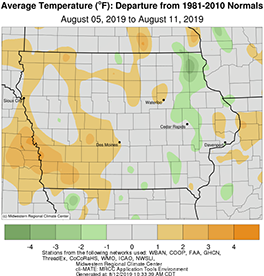 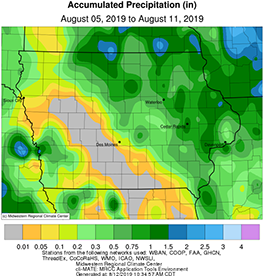