“Farmers across the state welcomed the precipitation that fell over the past few days,” said Secretary Naig. “Some areas reported an inch of rainfall, which will help improve the abnormally dry conditions and moisture stress that were reported in a few counties.”

Much needed rain fell across parts of Iowa during the week ending August 18, 2019, according to the USDA, National Agricultural Statistics Service. Statewide there were 5.5 days suitable for fieldwork. Fieldwork activities included scouting, spraying fungicides and insecticides and harvesting hay and oats.

Pasture condition declined for the seventh straight week and rated a season low 42 percent good to excellent. Comments mentioned pasture regrowth has been slow and supplemental hay feeding has been used due to drier than normal pasture conditions. Some livestock have struggled with continued temperature fluctuations.

After a three-week stretch of drier than normal conditions across the state, portions of southern and western Iowa received above average rainfall; the remaining parts of the state were near normal. Temperatures were slightly cooler than average with departures of one to two degrees below average across the state. The statewide average temperature was 70.9 degrees, 1.3 degrees below normal.

A low pressure system continued to move across Iowa through the afternoon on Sunday (11th) bringing measurable rainfall from showers and thunderstorms. There were locally heavy downpours with a stronger line of storms in southwest Iowa. Cloudy conditions kept temperatures below average, generally in the upper 70s to low 80s. A second low pressure system propagated through Iowa early on Monday (12th) morning bringing another wave of thunderstorms. As of 7 a.m., over 35 stations reported totals above an inch with Oakland (Pottawattamie County) reporting the highest 24-hour total of 2.82 inches. The average statewide rainfall was 0.39 inches. The system continued through eastern Iowa through the afternoon leaving behind 0.25 to 0.75 inches of rain in the northeast and southeast corners with isolated totals above an inch. Centerville (Appanoose County) reported 1.98 inches while Guttenberg Lock and Dam (Clayton County) observed 1.30 inches.

A weak cold front dropped through Iowa early Wednesday (14th), producing unseasonably cool but pleasant conditions. The statewide average high was 75 degrees, eight degrees below average. Isolated showers formed on the backside of a low pressure system over the Great Lakes, bringing light rain across eastern Iowa. Totals were generally under a tenth of an inch.

Cooler conditions prevailed Thursday (15th) under partly to mostly sunny skies. Highs stayed in the upper 70s and low 80s. Daytime temperatures on Friday (16th) remained seasonal with a light variable wind. Rain moved into southern Iowa on Saturday (17th) morning along with isolated thunderstorms throughout the day. Chariton (Lucas County) reported 0.95 inches of rain. A squall line ahead of a cold front brought much needed rain to Iowa on Saturday night into Sunday (18th) morning. Totals across the state were above one inch at over 60 stations with isolated two-inch totals at several stations. There were also preliminary reports of a brief tornado in Rock Rapids (Lyon County) as well as in Grand Mound (Clinton County). Several severe straight-line wind events were reported in northwestern Iowa.

Weekly rainfall totals ranged from 0.24 inches in Charles City (Floyd County) to 4.97 inches in Atlantic (Cass County). The statewide weekly average precipitation was 1.45 inches while the normal is 0.98 inches. The week’s high temperature of 89 degrees was reported on the 13th in Donnellson (Lee County) and Keosauqua (Van Buren County), on average three degrees above normal. Cresco (Howard County) reported the week’s low temperature of 50 degrees on the 15th, seven degrees below average. 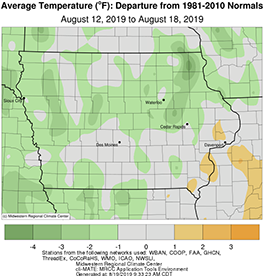 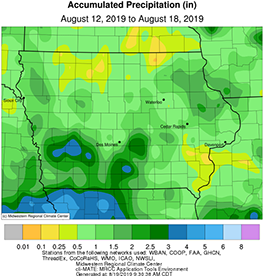