“Farmers finally got a much needed break from the rain and were able to make significant progress on fieldwork,” said Secretary Naig. “Many farmers breathed a sigh of relief as they finished planting over the weekend. If the favorable weather conditions continue, most of the state should be done planting by the end of this week.”

Iowa farmers finally got the dryer weather they were looking for with 5.2 days suitable for fieldwork statewide during the week ending June 9, 2019, according to the USDA, National Agricultural Statistics Service. This is the first time this season farmers had more than 5.0 days suitable for field work. This allowed farmers to plant corn and soybeans, cut hay, and spray fields with nitrogen.

Nearly all of the oats crop has emerged with 18 percent of the crop headed, 1 week behind last year and 8 days behind average. Oat condition rated 63 good to excellent.

Nearly one-third of the State’s first cutting of alfalfa hay was cut this past week. However, at 35 percent complete statewide, the first cutting is behind last year by 10 days and 8 days behind average. Hay condition improved to 63 percent good to excellent. Pasture condition rated 66 percent good to excellent, also an improvement. There was little stress on livestock this past week, but feedlots remain muddy.

Iowa finally received a much needed stretch of dryness and warmth as a large-scale circulation shift brought a much less active pattern across the region. Given the remarkable stretch of wetness during spring, the current dry period is a welcome break. Temperatures were unseasonably warm, generally three to six degrees above average. A majority of the state also experienced rainfall departures between 0.50 to 1.00 inch below average.

Sunday (2nd) afternoon and evening remained mostly sunny and slightly cooler than average with highs in the low to mid 70s. A fast moving wave of showers and thunderstorms entered western Iowa in the early morning hours of Monday (3rd). The system moved through southern Iowa for most of the day until it dissipated Monday evening. Rain totals were highest in southwestern and eastern Iowa with lighter totals in between. Randolph (Fremont County) reported 1.55 inches, while across the state in Dubuque (Dubuque County) 1.67 inches was reported, 1.36 inches above average. The swath of Iowa in between generally saw totals from 0.10 to 0.50 inches.

Tuesday (4th) was active across northeastern Iowa as showers and thunderstorms moved through from late evening through early Wednesday (5th) morning. Highs were in the low to mid 80s, on average four to six degrees above normal, helping fuel the storms. Rain totals were highest in the northeast quadrant with four stations reporting above an inch; Cascade (Dubuque County) reported 1.77 inches. Remaining totals across this region ranged from 0.25 to 0.75 inches with the average total around 0.44 inches.

A line of storms re-fired in east central Iowa on Wednesday afternoon with moderate rainfall. Rain totals varied from 0.20 inches in Newton (Jasper County) to 0.87 inches in Garwin (Tama County). The line dissipated as it moved through southeastern Iowa with a strong thunderstorm popping up in Van Buren County; severe hail was reported in Keosauqua. The end of the week was less active with warmer than average conditions. Northwestern Iowa reported highs near 90 degrees on Thursday (6th). Statewide temperatures averaged 86 degrees, eight degrees above average. Overnight lows were above average as well.

Friday (7th) was sunny and unseasonably warm with low humidity. High temperatures reached the mid to upper 80s, four to six degrees above average. Overnight lows into Saturday (8th) remained warmer than average, dipping down into the mid 60s. Conditions through the day on Saturday remained pleasant with continued sunny and dry conditions in Iowa. Temperatures were near to above average with high 80s in the north and low to mid 80s across southern Iowa. A weak cold front brought isolated measurable rain to extreme northwest Iowa late Saturday into Sunday (9th) morning, with accumulations ranging from 0.02 inches in Sioux City (Woodbury County) to 0.39 inches in Akron (Plymouth County) at 7:00 am.

Weekly rainfall totals ranged from no measurable accumulations at a handful of stations to 2.17 inches in Fulton (Jackson County). The statewide weekly average rainfall was 0.52 inches, just under half of the expected 1.18 inches. Temperatures averaged 71.8 degrees, 4.3 degrees above normal. The week’s high temperature of 91 degrees was observed at Hawarden and Sioux Center (Sioux County), as well as Rock Rapids (Lyon County) on the 6th; this reading was on average 13 degrees above normal. Cresco (Howard County) reported the week’s low temperature of 44 degrees on the 3rd, seven degrees below average. 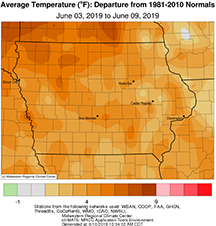 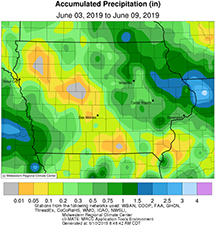 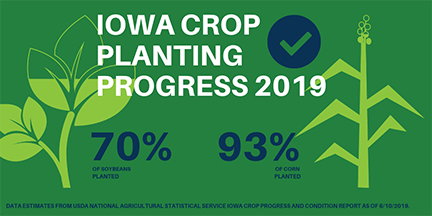