“The Corn Belt is stuck in a weather pattern that’s creating persistent, wet conditions,” said Secretary Naig. “This is causing historic planting delays. With only one day suitable for fieldwork last week, corn progress is 10 days behind and soybeans are two weeks behind last year. We know farmers are anxious to get their crops in the field if we get a break from the rain.”

May’s last full week saw an active weather pattern across Iowa that brought continued unseasonable wetness and severe weather. Measurable rainfall was observed every day of the reporting period along with six days of at least one severe weather report. Average temperatures were unseasonably cool with northwestern Iowa experiencing the coolest conditions.

Highs on Monday (20th) were well below average as cloudy conditions blanketed Iowa. Overnight lows Sunday (19th) into Monday dipped into the upper 30s northeast to upper 40s southeast. Highs only reached the mid 50s with the warmest temperatures in northern and eastern Iowa, though 10-20 degrees below average. Rain moved across Iowa’s southern third ahead of a strong low pressure system that brought unseasonably wet conditions across the state Tuesday (21st). The low spun out of Missouri and brought multiple waves of moderate to heavy rainfall across Iowa. All stations reported measurable rain with the highest totals across southern Iowa; accumulations ranged from 0.22 inches in Muscatine (Muscatine County) to 1.64 inches in Algona (Kossuth County).

Severe thunderstorms moved into southwestern Iowa late in the night into early Wednesday (22nd) morning. An EF-2 rated tornado touched down in Adair (Adair County) with estimated wind speeds up to 130 mph. Extensive structural damage was reported at a house and nearby farm buildings. Unfortunately, one fatality and one injury were reported; this was the first tornado-related death in Iowa since April 27th, 2014.

An EF-1 rated tornado also touched down in Anita (Cass County) causing barn damage. As the system exited Iowa, light rain showers formed in northwestern Iowa leaving average totals of around a tenth of an inch. The rest of the day was warm and windy under sunny skies. Brisk southwest winds between 25-35 mph boosted highs near 80 degrees in southeastern Iowa; temperatures were in the mid 60s to low 70s across the rest of Iowa. Isolated severe thunderstorms raced through Lee County during late evening, leaving behind 1-inch hail reports and heavy rainfall.

Thursday (23rd) was dry for most of the day with high pressure to the west of Iowa. A potent low pressure system moved into the state in the evening, bringing widespread showers and thunderstorms that remained into Friday (24th) morning. Warm daytime highs helped fuel thunderstorms in eastern Iowa during the late afternoon and evening hours. An EF-1 rated tornado briefly touched down in southwest Johnson County causing minor structural damage. Thunderstorms, some severe, formed over Iowa’s southern half during the evening and through the night on Saturday (25th). Rainfall persisted into Sunday (26th) with totals at 7:00 am averaging 0.25 inch; Keokuk reported 2.21 inches, 1.93 inches above average. Weekend temperatures were above average by up to four to eight degrees across most of Iowa.

Weekly rainfall totals ranged from 1.48 inches in Cedar Rapids (Linn County) to 5.42 inches in Red Oak (Montgomery County). The statewide weekly average precipitation was 2.60 inches, over double the normal of 1.05 inches. Temperatures averaged 58.9 degrees, 4.0 degrees below normal. The week’s high temperature of 87 degrees was observed at Keokuk Lock and Dam (Lee County) on the 24th, 11 degrees warmer than average. Sibley (Osceola County) reported the week’s low temperature of 33 degrees on the 21st, 14 degrees below average. 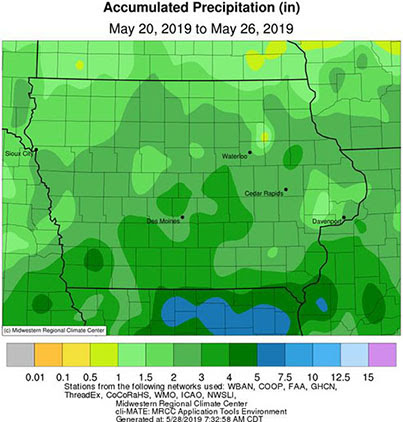 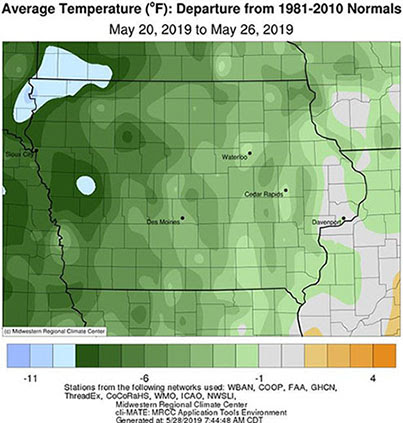 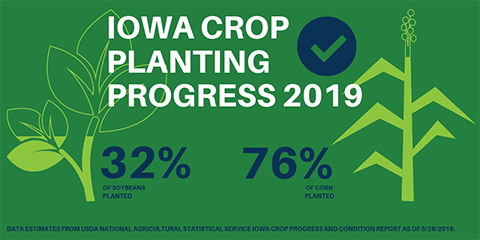