“Slightly above-average rain fall combined with consistently warmer weather has given crops across the state a boost,” said Naig. “Though some areas had below- average rain fall, soil moisture conditions remain adequate to surplus.”

While parts of Iowa experienced heavy rain, overall it was a hot, dry week which allowed farmers to get fieldwork done during the week ending July 7, 2019, according to the USDA, National Agricultural Statistics Service. Statewide there were 4.6 days suitable for fieldwork. Fieldwork activities included planting, harvesting hay, spraying and applying nitrogen.

Statewide, 1 percent of the corn crop has begun to silk, over 1 week behind last year and the 5-year average. Corn condition declined to 61 percent good to excellent. Soybean emergence reached 96 percent, 2 weeks behind average. Seven percent of the soybean crop has started to bloom, 12 days behind last year and 10 days behind average. Soybean condition rated 64 percent good to excellent.

The first week of July brought unseasonable warmth across Iowa with the average statewide temperature at 77.1 degrees, 3.4 degrees above normal. Showers and thunderstorms were reported on multiple days with parts of the northwestern quadrant receiving one to three inches of above average rainfall. Sections of eastern Iowa also observed unseasonable wetness, on the order of one to two inches.

Showers and thunderstorms skirted the Iowa-Minnesota border for much of Monday (July 1st) ahead of a low pressure system in Nebraska. As the low moved east, a line of strong thunderstorms formed in northwestern Iowa. These slow-moving storms produced locally heavy downpours and flash flooding in some locations. Eleven stations reported totals above two inches with three stations above three inches; Orange City (Sioux County) reported 3.62 inches.

A stationary front draped across central Iowa and continued to be a forcing mechanism for thunderstorms on Tuesday (2nd). Storms began popping up in the late afternoon and intensified into the evening as they moved into eastern Iowa. Rain totals were heaviest in west-central Iowa. Wednesday (3rd) saw similar behavior over most of Iowa as thunderstorms popped up along the existing boundary, transitioning south and east as the day progressed. Locally heavy rain fell along isolated lines of stronger thunderstorms. Two-day rain totals were greatest across the central west-to-east third of Iowa with 66 stations reporting over an inch; nine stations reported over three inches in central Iowa with a station in Boone County observing 5.13 inches. The statewide average rainfall was 0.51 inch, 0.19 inch above average.

Two waves of showers and thunderstorms moved across northern Iowa on Independence Day (4th). Rainfall totals were in the general range of a quarter of an inch to over two inches. Cherokee (Cherokee County) reported 2.39 inches while Ionia (Chickasaw County) reported 2.11 inches. Temperatures were three degrees warmer than normal statewide with highs in the mid to upper 80s; eastern Iowa reported lower 90s.

Another line of thunderstorms moved into northwestern Iowa during the morning hours on Friday (5th), though it quickly dissipated in the afternoon. Rain totals ranged from 0.13 inch in Spirit Lake (Dickinson County) to 0.91 inch in Sibley (Osceola County). Isolated storms re-fired in eastern Iowa in the evening with locally heavy accumulations. Multiple stations across northeastern Iowa reported rainfall above one inch with Waukon (Allamakee County) observing 2.56 inches. Daytime highs were in the lower 90s in eastern Iowa, up to six degrees above average. The rest of Iowa experienced seasonal conditions under partly cloudy skies. Saturday (6th) was slightly cooler than normal with cloud cover that gradually dissipated through the day. Highs were in the upper 70s and lower 80s while overnight lows into Sunday (7th) cooled into the 60s under clear to partly cloudy skies.

Weekly rainfall totals ranged from no accumulation in Corning (Adams County) to 5.55 inches in Ogden (Boone County). The statewide weekly average precipitation was 1.13 inches, slightly above the normal of 1.08 inches. The week’s high temperature of 97 degrees was reported on the 1st in Cherokee (Cherokee County), 12 degrees above normal. Cresco (Howard County) reported the week’s low temperature of 56 degrees on the 7th, three degrees below average. 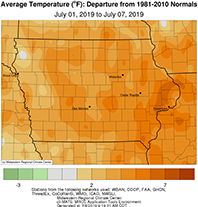 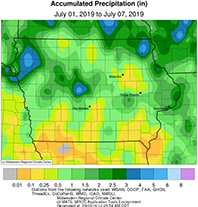