“Farmers battled wet conditions last week but most of the state got a welcome reprieve on Thursday,” said Secretary Naig. “There were lots of combines rolling over the weekend.”

Ninety-five percent of the corn crop has reached maturity, nearly 2 weeks behind average. Twenty-six percent of the crop has been harvested for grain, 8 days behind last year and 11 days behind average. Moisture content of field corn being harvested for grain was at 21 percent. Corn condition rated 67 percent good to excellent.

Most of the state’s pasture regrowth has gone dormant with cooler temperatures this past week. Pasture condition rated 48 percent good to excellent. Mud continues to be an issue in feedlots and some livestock have struggled with temperature fluctuations.

An active weather pattern brought above average rainfall to much of the state’s north-central corridor with near to slightly below average totals across the rest of Iowa. Unseasonable coolness persisted across the state with temperature departure up to six degrees below average. The statewide average temperature was 42.5 degrees, 6.9 degrees colder than expected.

A narrow band of showers and a few embedded thunderstorms streamed into Iowa ahead of a low pressure system through the evening hours on Sunday (20th). The complex expanded and covered much of the state’s eastern half into the early morning hours on Monday (21st). Another wave of showers formed across central Iowa and moved east as the low propagated to the northeast. Two-day rain totals were highest across central Iowa with Clive (Polk County) reporting 2.17 inches of rain. Over 100 stations reported totals at or above one inch with the statewide average at 0.73 inch. As the system moved into Wisconsin, additional showers formed on the backside of the low along with strong sustained winds out of the southwest, gradually shifting to a westerly direction. Wind speeds reached into the 20 to 30 mph range with higher five-second sustained wind gusts; Estherville Municipal Airport (Emmet County) reported a gust of 60 mph.

The gusty winds gradually receded though the daytime hours on Tuesday (22nd) along with clearing skies. Highs reached into the low to mid 50s, up to 15 degrees cooler than average with the statewide high of 52 degrees, seven degrees below normal. Rain showers moved through Iowa during the morning and afternoon hours on Wednesday (23rd) as a low pressure system moved through the state’s southern half. Measurable totals were highest in northwestern Iowa with Storm Lake (Buena Vista County) reporting 0.40 inch. Totals across the rest of Iowa were generally between 0.10 inch and 0.30 inch. Daytimes highs were also well below normal, ranging from the 40s north to lower 60s south.

Thursday (24th) and Friday (25th) were dry and unseasonably cold with partly to mostly sunny skies as a dome of high pressure dominated the Midwest. Thursday’s highs peaked in the mid to upper 40s with overnight lows in the upper 20s and lower 30s; daytime highs on Friday rebounded into the middle 50s with winds out of the south. The remnants of Tropical Storm Olga brought light rain showers into southeastern Iowa during the afternoon hours on Saturday (26th).

Statewide overnight lows averaged 29 degrees, seven degrees below normal. Weekly precipitation totals ranged from 0.10 inch at Sigourney (Keokuk County) to 2.25 inches in Clive (Polk County). The statewide weekly average precipitation was 0.88 inch, while the normal is 0.56 inch. The week’s high temperature of 68 degrees was reported on the 21st in Burlington (Des Moines County), six degrees above average. Cresco (Howard County) reported the week’s low temperature of 20 degrees on the 26th, 12 degrees below normal. 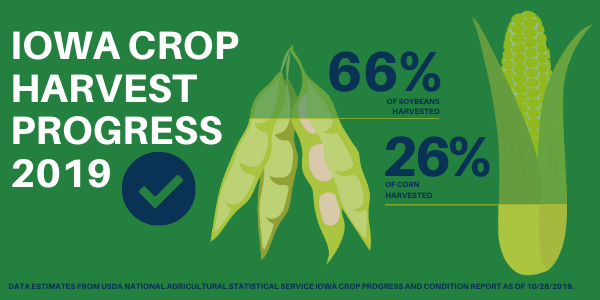