“Recent temperatures have been cooler than normal,” said Secretary Naig. “The good news is that the initial fall outlook suggests warmer-than-normal temperatures in September, October and November, which will benefit farmers during harvest.”

Rain across most of Iowa improved dry soil conditions during the week ending August 25, 2019, according to the USDA, National Agricultural Statistics Service. Statewide there were 5.0 days suitable for fieldwork. Reporters throughout the State mentioned the need for warmer weather as cooler than normal temperatures have slowed crop development. Fieldwork activities included spraying fungicides and insecticides on late planted crops and harvesting hay.

Continued wetter-than-average conditions were found across central and southern Iowa during the reporting period. Locations in northeastern Iowa experienced rainfall deficits up to and slightly over an inch. Unseasonable coolness also persisted with temperatures up to five degrees below average across parts of Iowa. The statewide average temperature was 68.5 degrees, 3.1 degrees below normal.

A low pressure system moved out of Iowa through the afternoon hours on Sunday (18th) leaving measurable rainfall across the southern half of the state. Northwest winds and partly cloudy conditions kept high temperatures in the low to mid 70s in northern Iowa and low 80s in the south. Rain totals reported at 7 a.m. on Monday (19th) were heaviest in southeast Iowa with a station in Ottumwa (Wapello County) observing 0.92 inches. Widespread totals between 0.10 inch and 0.25 inch were also reported.

Conditions during the day were warm and humid with highs in the mid-80s and variable winds. Daytime conditions created an unstable atmosphere primed for overnight convection; discrete thunderstorms began to fire just before midnight in north-central Iowa. These thunderstorms quickly turned severe and coalesced into strong mesoscale convective system (MCS) that moved southeast through central Iowa into the morning hours of Tuesday (20th).

Iowa experienced near perfect weather conditions Thursday (22nd) and Friday (23rd) as a large dome of high pressure dominated the upper Midwest, bringing clear and comfortable conditions. Daytime highs were in the mid to upper 70s with unseasonably cool overnight lows in the mid to upper 50s, on average five degrees below normal. Pleasant and dry conditions continued through the weekend with partly cloudy skies and a light southeasterly wind on Saturday (24th). Temperatures remained in the mid-70s with low relative humidity. Overnight lows into Sunday (25th) dipped into the upper 50s to low 60s as cloud cover began to increase across the state.

Weekly rainfall totals ranged from no accumulation in Decorah (Winneshiek County) to 4.47 inches in Guthrie Center (Guthrie County). The statewide weekly average precipitation was 1.12 inches, slightly above the normal of 0.98 inch. The week’s high temperature of 92 degrees was reported on the 20th in Little Sioux (Harrison County) and Oakland (Pottawattamie County), on average nine degrees above normal. Cresco (Howard County) reported the week’s low temperature of 47 degrees on the 22nd, nine degrees below average. 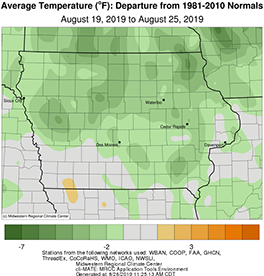 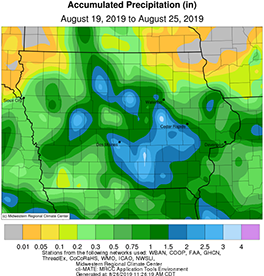