“Wet conditions along with unseasonably warm temperatures continued across Iowa last week,” said Secretary Naig. “Farmers in some pockets of central and west central Iowa have started harvesting, but we’re about a week away from widespread harvest.”

Nearly all of the corn crop was in or beyond the dough stage at 97 percent complete statewide, over 2 weeks behind the 5-year average. Eighty-two percent of the crop has reached the dented stage or beyond, 17 days behind last year and 12 days behind average. Eighteen percent of corn reached maturity, 19 days behind last year and 2 weeks behind average. There were a few reports of farmers in the central Iowa district that harvested corn for grain this past week. Corn condition rated 65 percent good to excellent.

Unseasonable warmth and wetness prevailed across Iowa during the reporting period. Above-average rain fell across the state with portions of Iowa reporting up to 3 inches more than normal. This was also the warmest week for Iowa since the reporting period ending on July 22nd; the statewide average temperature was 73.6 degrees, 12.9 degrees warmer than expected.

Thunderstorms cleared extreme southeastern Iowa by Sunday (15th) afternoon as a high pressure system moved into northern Iowa. Skies cleared through the early evening hours as unseasonable warmth blanketed the state. Highs reached into the mid to upper 80s with the statewide average high of 86 degrees, 11 degrees above normal. Monday (16th) was another warm and dry day under sunny skies with southerly winds. Highs reached into the low 90s across multiple stations in southern Iowa.

Overnight lows into Tuesday (17th) were well above average, remaining in the upper 60s and low 70s. Parts of northwestern Iowa were up to 26 degrees above average. The statewide average low was 65 degrees, 15 degrees above average. Showers and thunderstorms started to pop up in northwestern Iowa ahead of a warm front just after midnight on Wednesday (18th). The narrow band of thunderstorms propagated into eastern Iowa during the afternoon. The line fell apart during the evening hours with isolated stronger storms popping up in east-central Iowa. A new complex of thunderstorms pushed into Iowa just before midnight.

Another line of thunderstorms formed across northern and eastern Iowa early Friday (20th) morning and slowly moved east. The line gradually dissipated near the Iowa-Illinois border after noon. Conditions for the rest of the day were unseasonably warm under sunny skies. Highs reached into mid to upper 80s with the statewide average high hitting 84 degrees, 11 degrees above normal.

Clouds pushed into Iowa overnight into Saturday (21st) holding overnight temperatures in the low 70s, up to 24 degrees above average. Cloudy conditions persisted throughout the day as showers and thunderstorms moved into southern Iowa. The complex moved out of the state during the evening hours. Stronger thunderstorms ahead of a low pressure system moved into southwestern Iowa after 9 p.m. and expanded across much of the state’s western half. Rain expanded into eastern Iowa through the early morning hours of Sunday (22nd). Rain totals at 7 a.m. were largest in southern Iowa with nine stations reporting 2 inches or more. Centerville and Rathbun Dam (Appanoose County) reported 3.60 inches and 2.71 inches, respectively. The statewide average rainfall was 0.81 inches.

Weekly rainfall totals ranged from 0.02 inches in Hawarden (Sioux County) to 4.71 inches at Nora Springs (Floyd County). The statewide weekly average precipitation was 1.74 inches, while the normal is 0.77 inches. The week’s high temperature of 93 degrees was reported on the 15th, 17th and 18th at multiple stations in south-central Iowa.  This reading was on average 17 degrees above normal. Britt (Hancock County) and Forest City (Winnebago County) reported the week’s low temperature of 52 degrees on the 16th, two degrees below normal. 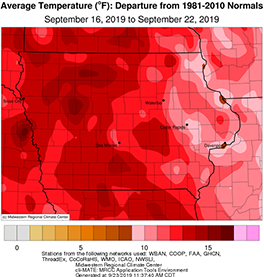 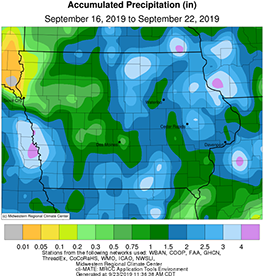