“Near seasonal temperatures along with the pattern of dry conditions continued across most of the state last week,” said Secretary Naig. “With four percent of the corn and 15 percent of the soybeans nearing maturity, farmers are starting to prepare equipment for harvest.”

Most of Iowa experienced cooler than normal temperatures and below normal precipitation during the week ending September 8, 2019, according to the USDA, National Agricultural Statistics Service. Statewide there were 5.7 days suitable for fieldwork. Fieldwork activities included harvesting hay and seed corn, chopping corn silage, seeding cover crops and preparing machinery for corn for grain and soybean harvest.

The third cutting of alfalfa hay reached 76 percent, nearly 1 week behind average. Pasture condition declined from the previous week to 42 percent good to excellent. There were no livestock issues to report from this past week.

Drier than normal conditions prevailed across most of Iowa during the first week of September; precipitation deficits were generally under three-quarters of an inch across the state with only the southwest corner of Iowa reporting above average totals. Temperatures were generally seasonable with departures of one to two degrees above and below average in parts of western and eastern Iowa, respectively. The statewide average temperature was 66.8 degrees, 1.8 degrees below normal.

The rest of Sunday (1st) was uneventful across Iowa with high temperatures reaching the mid to upper 70s under cloudy skies. Overnight lows into Monday (2nd) dipped into the mid-60s. Partly sunny skies and a southerly wind helped boost temperatures into the low 80s on Labor Day.

Shortly after midnight on Tuesday (3rd) thunderstorms, some of which were strong, formed in northeastern Iowa and quickly moved into Illinois. Additional showers and thunderstorms moved through Iowa during the late morning and afternoon hours, bringing measurable rain across the state’s northern half. The highest rain totals were reported in northeastern Iowa with Lansing and Waukon (Allamakee County) observing 1.53 inches and 1.34 inches, respectively.

Wednesday (4th) was a cool and mostly sunny day across Iowa. Highs were in the low 70s, up to 14 degrees below average at certain locations. The statewide average high was 74 degrees, five degrees below normal.

Thursday (5th) started off cool and sunny with comfortable conditions into the early afternoon before a low pressure center over Minnesota pulled a warm front through Iowa. The arrival of the front brought warm and humid conditions through the evening hours before a cold front cleared the state into Friday (6th) morning. Winds shifted into a northerly direction under sunny skies. High temperatures peaked in the upper 70s and lower 80s.

Saturday (7th) began mostly clear until showers moved through the state in the afternoon hours. Thunderstorms formed in southern Iowa during the nighttime hours and lingered into Sunday (8th) morning. Rainfall totals at 7 a.m. were highest in southwestern Iowa with Shenandoah (Page County) reporting 2.56 inches; over ten stations reported totals above one inch with the statewide average rainfall of 0.41 inches.

Weekly rainfall totals ranged from no accumulation at multiple locations to 2.56 inches in Shenandoah (Page County). The statewide weekly average precipitation was 0.50 inches while the normal is 0.84 inches. The week’s high temperature of 92 degrees was reported on the 3rd in Donnellson (Lee County), 11 degrees above average. Elkader (Clayton County) and Manchester (Delaware County) reported the week’s low temperature of 45 degrees on the 9th, on average seven degrees below normal. 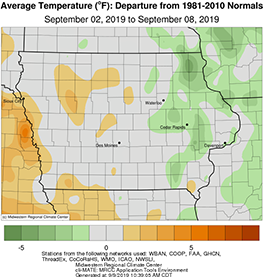 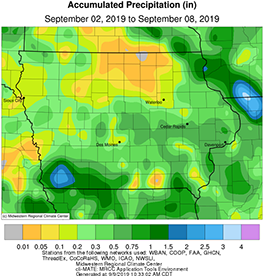