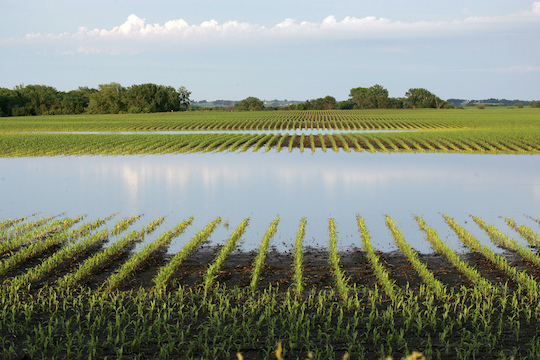 DES MOINES, Iowa – The U.S. is coming off the wettest 12 months on record, and Iowa farmers are being encouraged to boost conservation practices to help them adapt.

Too much rain has kept many farmers out of their fields this spring, at a time when U.S. farm income already is projected to drop 45% below a 2013 high. Agronomy professor Gene Takle at Iowa State University said Iowa’s weather is significantly affected by the Gulf of Mexico jet stream, which will bring excess moisture to the state for the foreseeable future.

“Physics is very clear that this jet is getting stronger,” Takle said. “And so it’s a natural consequence that our climate in the Midwest should be linked to increasing rainfall.”

The National Oceanic and Atmospheric Administration said the period between May 2018 and April 2019 was the wettest 12 months since record-keeping began in 1895. The Center for Rural Affairs has encouraged farmers to adopt preventive measures, such as wetlands, grassed waterways and cover crops.

Iowa has experienced excessive rainfall almost every year since 2010, according to Rural Affairs policy associate Kayla Bergman. She said preventative measures such as cover crops can provide a work-around and improve soil health to better hold the moisture.

“If you do not hay or graze that cover crop this year, so that the soil is not washing away throughout the rest of the spring and summer, even though it’s not a cash crop, you just have something on the ground,” Bergman said.

The federal government has promised financial aid to farmers harmed by the trade disputes, but to qualify they had to plant a crop. Takle said that puts many between a rock and a hard place.

To date, corn planting is 68% complete, in contrast to 97% at this time last year; while only 40% of soybeans are planted compared to 87% this time a year ago.