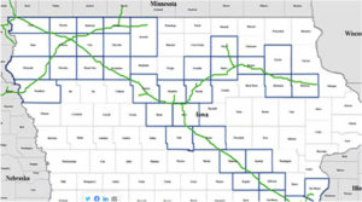 SIOUX CITY — A northwest Iowa judge has scheduled a hearing on September 30 to consider a couple’s request that a carbon pipeline developer be at least temporarily barred from conducting surveys on their Woodbury County land.

Navigator has sued William and Vicki Hulse of Moville, accusing the couple of violating a state law that allows its agents to access to land along its proposed pipeline route. The Hulses have filed a counter claim, arguing the law is an unconstitutional taking of private land. Brian Rickert, an attorney for the pipeline developer, is urging the judge to expedite the case.

“Farmers Almanac, I don’t know how accurate that is, you know they’re saying we’re going to have an early and heavy winter, so we really do need to get out on this parcel and get our surveying done,” Rickert said.

Brian Jorde, the couple’s attorney, told the judge there’s no legal deadline for completing the land surveys along the pipeline route.

“There is no urgency other than the company’s own investor wish list to get this done,” Jorde said. “They haven’t filed for eminent domain rights. They have no permit application on file.”

The judge who held a status hearing on the dispute let both attorneys present some initial arguments this morning. Navigator’s attorney accused pipeline critics of using the court to try to slow down the project.

“What we don’t want to have to deal with is tactics. We want to deal with what the law is. We’ve brought it to you. We think we’re right. We think they’re wrong. That is why we have judges to decide who wins in these situations,” Rickert said.

Jorde, the attorney for the couple refusing to let pipeline surveyors on their property, told the judge he’ll be citing a recent Supreme Court opinion on property rights.

“Once the constitutional right, the right to foreclose or prevent unwanted entry onto a property is destroyed, you can’t un-ring that bell,” he said. “You cannot go back.”

Jorde has filed similar claims for landowners in Clay and Butler Counties. Navigator is suing a Sioux Rapids man and two Butler County property owners who have refused to allow the pipeline’s surveyors on their property.

McNider Museum getting ready for some Friday fun!