Iowa soybean growers meeting with leaders in China and Japan 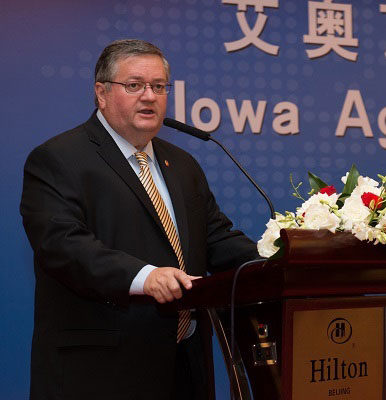 DES MOINES — A delegation of Iowa soybean growers is in Asia, meeting with agricultural leaders in the key trading nations of China and Japan.

Iowa Soybean Association CEO Kirk Leeds says the visit comes at a time when trade between the U.S. and China is at a near stand-still and it’s had a dramatic impact on Iowa soybean growers. The Iowans visited three cities in China in recent days.

“We were there with a small group of soybean farmers to touch base with some of our customers, at least our previous customers, to remind them that we still have plenty of soybeans to sell and these are high quality soybeans,” Leeds says. “We look forward to an opportunity to resume our exports of soybeans on a significant scale in the hopefully not-to-distant future.”

Leeds says he’s hopeful something positive can come out of the upcoming talks between the U.S. and China. “Farmers in Iowa and across the country have been on a kind of yo-yo here the last several months where we think we’re making progress and may be on the verge of some kind of agreement and then things seem to fall apart,” Leeds says. “Hopefully, this is a sign we’re back at the negotiation table and that we’ll see some positive movement.”

Before the trade troubles began, Iowa’s top agricultural export was soybeans and soybean products, worth more than $3.3 billion a year. Nearly one-quarter of all Iowa soybeans were shipped to China. The Iowa delegation is now in Japan, which remains one of the state’s top trading partners.

“Japan is a very mature market for the United States, at least on soybeans. We’ve been there for almost 60 years,” Leeds says. “The population of Japan is falling rapidly and the economy has been stagnant for about a decade but it’s still an important market for us.”

There is promise Japan may further open its markets to take in more U.S. products, including pork, poultry and beef. Leeds says the Iowa delegation will spend the next few days in Japan touring ag facilities and farms, returning to Iowa on Friday.