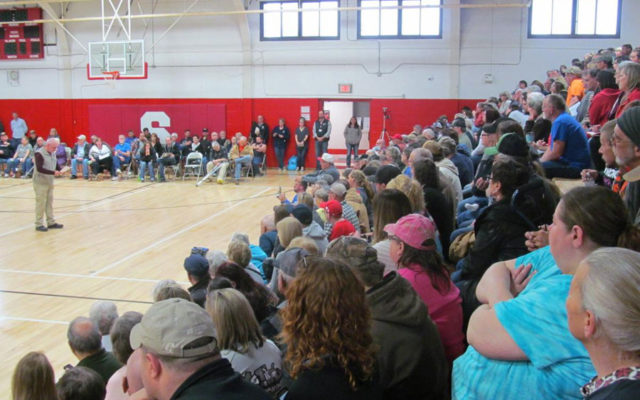 DES MOINES — One of the governor’s top aides is in southwest Iowa Monday meeting with local officials to discuss how to repair the levees that have been breached by Missouri River flooding. Governor Kim Reynolds said she’s aiming for a regional approach to the flood disaster.

“We’re working to collectively get together with Governor Rickets as well as Governor Parsons, especially as we move forward with the levee repair and recovery,” Reynolds told statehouse reporters . “We don’t have a lot of time. We’ve got to figure out how we do this differently.”

According to the National Weather Service, high flood waters have returned in Montana, the Dakotas and northwest Nebraska along smaller rivers that feed into the Missouri. Reynolds announced last week that every Missouri River levee from Council Bluffs to the Missouri border had been compromised.

“There’s no way under God’s blue skies that the Corps of Engineers is going to be able to repair every breach in every levee from Missouri Valley to St. Joe before the spring thaw,” he said. “I need to say that to you folks. We’re going to have problems out there this spring, this summer, this fall.”

Crecelius asked motorists and pedestrians to stay off the levees. With previously-evacuated areas of the county still off limits and some county roads underwater, Crecelius als0 urged residents not to drive around or remove barricades, or venture into flooded territory.

“If you were evacuated and the evacuation order has not been lifted, there’s a reason for that,” he said. “…We have had one fatality and it wasn’t one of the local folks. It was someone who was traveling through here and they decided to go around a ‘Road Closed’ sign and they ran into water. We put the signs up for your safety.”

Shelters for flood victims in Fremont County remain open at the United Faith Church in Sidney and Shenandoah’s Old Armory.

The governor submitted paperwork to the Federal Emergency Management Agency indicating it would cost $525 million to fix the river levees in southwest Iowa.