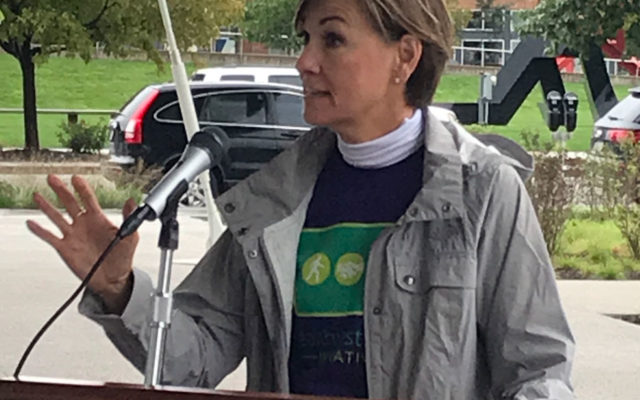 Republican Governor Kim Reynolds has not yet seen a document outlining how the Trump Administration may address farmers’ fury over ethanol waivers granted to oil refineries.

“I’m optimistic that we’ll hopefully get something this week, but we’re still waiting to see the final details on it,” Reynolds told reporters Wednesday.

Bloomberg and Reuters are reporting President Trump is expected to sign-off on the deal Friday and make the details public next week. Reynolds was in the Oval Office a month ago, arguing for a policy that will increase federal biofuel production and blending requirements. The oil industry has been pressing for concessions that would alter what Reynolds and others discussed with Trump.

“I’m going to still take the president at his word,” Reynolds said. “I know he’s worked really hard to make our farmers and the biofuels industry whole and so I look forward to seeing in writing the verbal agreement that we came to.”

If that agreement is what materializes, Reynolds has invited Trump to Iowa to make the announcement. Reynolds suggested the president’s chief economic advisor, Larry Kudlow, is leading the biofuels negotiations.

“They had the meeting at the UN. They were working on a Japan free trade agreement, so there have been some other things that Kudlow and the team have been working on,” Reynolds said today, “so hopefully that’s done and now we can move into this.”

Earlier this week, Reuters reported the impeachment inquiry in the U.S. House was diverting White House attention from negotiations over biofuels. Reynolds told reporters she’s not ready to weigh in on impeachment.

“Really, until they take a vote and I know what they’re accusing him of, I don’t think there’s anything there, so there’s procedures that they have to follow and I’m not sure that’s been followed yet,” Reynolds said late this morning, “so you now right now I’m not going to weigh in because: ‘Have they taken a vote?’ and ‘What are the charges that they’re accusing him of?’”

Reynolds said it is possible to do two things at once and she’s urging Democrats in the U.S. House to ratify the USMCA as they conduct the impeachment inquiry.