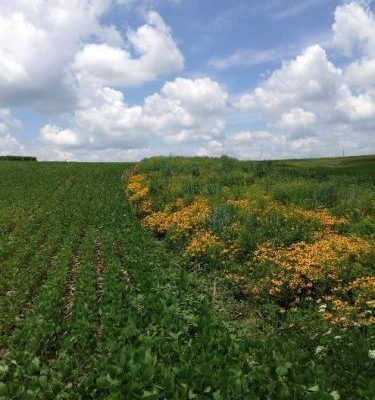 PRAIRIE CITY — Iowa State University has landed a grant to study how quickly soil health changes after the implementation of prairie strips among row crops.

Richard Cruse, an ISU agronomy professor, says the studies so far show how integrating small amounts of prairie into strategic locations within corn and soybean fields can yield huge benefits for soil, water and biodiversity.

“We’ve got the research that shows putting 10% of the land in prairie strips in the right position, you’d think that would reduce soil erosion if it’s going to effect it, 10% should reduce 10%,” Cruse says. “Well, the work we did indicated 10% placement reduced soil erosion losses by 90%.”

It’s already well-established, he says, how prairie strips can improve an area’s ecology, bringing in wildlife from birds to butterflies.

“But we haven’t understood how long the favorable soil affect that’s created by this condition will last,” Cruse says. “If we have to rotate those strips into another location, if you’re saving soil, soil’s going to accumulate in those areas, if it runs off areas up above, farmers may want to rotate their position.”

Cruse says the soil experiments will take place in several places, including at the Neal Smith Wildlife Refuge near Prairie City.

“Part of it is done there, part of it’s done in Missouri, part of it’s done in other locations in Iowa,” Cruse says. “It’s advantageous when you work with farmers, if you can show the affect of what’s occurring in an individual’s back yard, he or she is much more likely to try it than if you say it worked somewhere in China or Europe.”

ISU has done extensive research on prairie strips, including through a program launched in 2003 called STRIPS, which stands for Science-based Trials of Rowcrops Integrated with Prairie Strips.

The latest three-year grant from the Foundation of Food and Agriculture totaled $746,000.