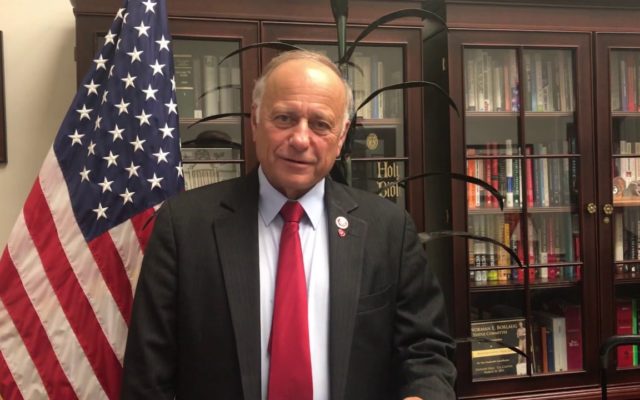 LE MARS — Iowa Congressman Steve King says he expects to be placed back on several legislative committees in the near future.

King, a Republican from Kiron, was removed from all committee assignments in January following a New York Times article where he addressed white supremacy. Speaking in Le Mars on Monday, King said he’s been talking with House leaders about restoring his status.

“There is that possibility,” King says. “I’ve had some discussion with leadership as recently as just the end of last week. I expect to go back next week and pick up that discussion. I’ve let them know that I’m going to start to turn this up now. I’ve been too nice, too long.”

During the Times interview, King said he didn’t understand how the phrases white supremacy, white nationalism and western civilization had developed negative connotations. King says he was misquoted. He says he deserves to have his assignments restored as there’s no precedent for how he’s being treated.

“We asked the Congressional Research Services to go back through the history of the United States Congress and identify each member of Congress that had been removed from all of their committees, had served with no committees,” King says. “Since antiquity, as far back as they could go in the records, there have been four.”

King is the fourth — and he says two previous representatives were convicted of serious crimes while the third is still facing trial. King points out, he’s never been charged with anything. “What have I been accused of? I’m accused of a misquote, by the way, for asking a politically incorrect, rhetorical question. That’s the level of it. This is something that cannot be allowed to stand,” King says. “If it stands, there will be speech sanctions against any member of Congress that speaks out, no matter how objectively true they are.”

King says if he remains stripped of his committee assignments, then our constitutional rights will be jeopardized. “It supresses the freedom of speech, thought and expression for the entire nation,” King says. “People should think that if you can’t speak freely, neither can you even think freely because what good are those thoughts if you can’t express them and how do you measure them against someone else? Another way to put this is, you’ve gotta’ put people together, they’ve got to exchange ideas and have open conversation. Let their imaginations soar.”

The 4th District Republican says he will continue to “put the heat on the leadership.”