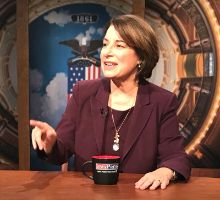 MASON CITY — Minnesota Senator Amy Klobuchar held a final Iowa rally in Mason City last night and has been downplaying the idea her candidacy will stall once senators start spending up to 12 hours a day sitting as jurors in the impeachment trial.

“We get a lot of questions: ‘Well, how are you going to keep running?’ I always tell people that I’m a mom and I can do two things at once,” Klobuchar told a crowd in Waukee Sunday evening. “I tell them of these great people out here who have been helping me and the surrogates.”

Klobuchar’s husband and daughter and the Minnesotan who won an Olympic gold medal as coach of the U.S. Curling Team will campaign in Iowa for Klobuchar this week.