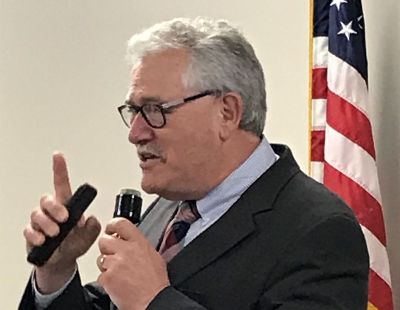 DES MOINES — The Iowa Democratic Party has a new chairman.

“We’ve endured enough negatives. We must now focus on what is positive and what we can do to make life better for Iowans,” State Representative Mark Smith of Marshalltown said in a speech to the Iowa Democratic Party’s State Central Committee Saturday.

The committee elected Smith by a “conclusive” margin, according to the parliamentarian handling the election.

Smith takes over from Troy Price, who resigned as chairman after criticism of the party’s inability to provide timely results from the Iowa Caucuses.

“I made the decision to step down so that we don’t get constantly stuck in constant recriminations about what happened on Caucus Day, but rather that we can turn the page and keep our focus on what matters most, which is winning in November,” Price said in a farewell speech Saturday afternoon. “That is the goal of this party.”

Price got a standing ovation from the party leaders after his brief remarks. Smith acknowledged the difficulties of the past two weeks and he promised to restore trust in the party.

Smith and three other men from Des Moines were nominated to be the next chairman and each was given four minutes to address the party’s State Central Committee, 19 of whom were listening and voting by phone, with other voting members in the room. Bob Krause has run unsuccessfully for party chairman before. Gabriel de la Cerda is a factory worker and candidate for congress in 2014.

“We have the wind at our back because there is a Trump in the White House, but we cannot play prevent defense,” de la Cerda said in his speech to party leader. “We have to go on the attack.”

Joe Henry, a long-time activist in the League of United Latin American Citizens, was the other nominee.

“Young, old, rural, urban, people of color and diverse communities — we hear you,” Henry said. “…The party must become your voice.”

Smith, who spoke with reporters after the party meeting adjourned, said his first priority will be to travel around the state to hear the concerns of party activists.

“We had thousands of volunteers across this state who did their jobs incredibly well and a number of people talked about the positive experience they had with the caucus in this wonderful unique method of democracy that we have here in this state,” Smith said.”We had things that went wrong…This review will give us some answers in that regard, but let’s keep in mind that most things very well.”

Before Smith took the helm, party leaders arranged for a former federal prosecutor and a former state attorney general to investigate what caused the Caucus counting chaos. Smith is now a member of the Democratic National Committee and will be engaged in the debate over whether Iowa’s Democratic Party Caucuses should be first in 2024.

“We, in Iowa, are commuted to this process,” Smith said. “We study the candidates very well. We give the candidates the opportunity to travel across this state and to meet with people and to hone their message as well and so I will make a strong argument that we should keep the caucuses here.”

Smith announced last fall that he would not seek reelection to an 11th term in the Iowa House. Smith says as a sixth generation Iowan, it’s important to him that the state have a strong Democratic Party and that’s why he’s put off retirement to tackle this job.