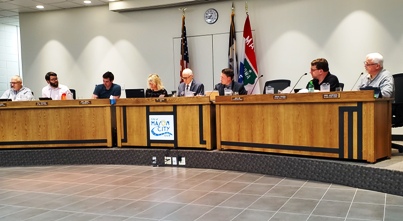 City Administrator Aaron Burnett says the funds from the increases will be used to address infrastructure replacement needs in the community, especially during adverse events.  “It’s water main breaks due to extreme weather, whether it’s flooding due to “I & I” (inflow and infiltration) getting into the sewer systems and causing backups. All of these items really address the dilapidation of infrastructure over the years and the requirement of making continued investments in those funds so that we have reliable utilities.”

Burnett says the costs of maintaining the city’s infrastructure continue to rise.  “The cost of construction has outpaced inflation …it’s been much higher than inflation, but those costs are really being borne by the repairs through increased utility costs. Not to mention there’s more and more regulatory requirements to come down on water and sewer making sure they we are providing very clean high quality water to the individuals who utilize our water utility, but also making sure that we are passing clean waste water when it’s returned to the river.”

Burnett says a small increase in funds now is better than deferring to a later time in attempting to address infrastructure issues around the community.  “One of the biggest problems you can run into is if you have deferred maintenance or deferred replacement on a utility, often times you don’t see the impact that until 10, 20, 30, or 40 years down the road. At that point, the cost of replacing all of the miles and miles and miles of water and sewer lines and storm sewers within the community becomes absolutely oppressive on the rate payer because that cost is then all borne at one point. So it’s important to make sure that you’ve got to steady schedule of replacing all of this infrastructure so that we’re not essentially taking this time for ourselves and then our grandchildren are paying all the cost of the maintenance we didn’t do.”