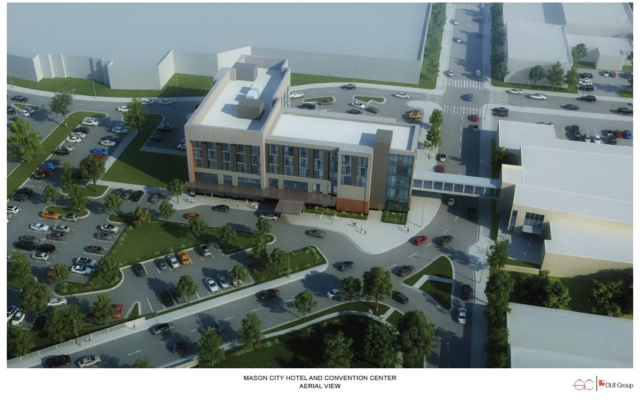 MASON CITY — The public got an opportunity during an open house last night to ask questions and view architectural renderings of the 105-room, full-service hotel and conference center that’s part of the River City Renaissance project.

David Rachie of Gatehouse Capital says his company is happy to be once again involved in the project.  “It’s been fantastic. The reason is there’s been so much work in such a short period of time, because we don’t have a lot of time. Music Man Square and the Mason City Foundation stepped up. Mason City Theater stepped up. Everybody’s really pitched in to get to a project that’s going to work.”

Rachie says despite construction costs rising, the current plans for the hotel are more efficient and will be overall better for the project.  “When we stepped into this, the bond was passed in 2017. That’s the amount of money that we had. Since then we’ve had general construction costs go up 10%, steel has went up 25%, interest rates have gone up 30%. We essentially had a lot less money to work with, but because we were much more efficient with this design. We stacked the hotel on top of the convention center which saves some money. We did the hotel elevators the same as the skywalk elevators and stairs, so we saved a lot of money there. We’re very efficient, and we actually have a bigger project now than we did last time. Ultimately it will still have the same visual impact for the community but economically it will be far greater than we saw last time.”

Rachie says they’ve also adapted the convention center space to have more breakout space to accommodate the current needs of convention clients, which they didn’t have in the original plans.    “One of the things we’ve learned from other projects since we’ve been working on this that the new convention centers really require about 3000 square feet of flexible space. The younger people, the “millennials”, they like to get together in small groups, and this allows them to do that naturally on their own in that space. So we’ve added that, which is going to be huge, it really future-proofs what we are doing.”

Gatehouse also provided an update on the project to the city council last night during a workshop session.