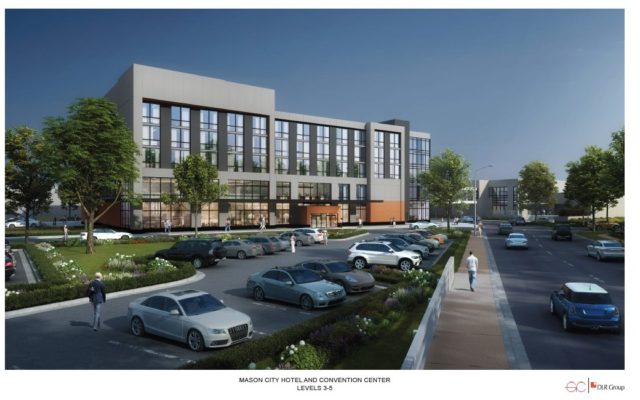 MASON CITY — Mason City city leaders say they’ve finalized an agreement with Gatehouse Mason City LLC for the construction of a hotel that’s part of the River City Renaissance project. The hotel is a key component as it fulfills the private investment portion of the $39 million project being supported through the Iowa Reinvestment Act.

City Administrator Aaron Burnett says, “The agreement contains incentives for the development of the hotel and conference center, and then also requirements for those incentives, such as the development of a conference center that can accommodate 700 people, a hotel that will have over a hundred rooms in it, and obviously a select service hotel, a very quality hotel, and providing an avenue for developing the River City Renaissance to the to the vision that’s been provided.”

Burnett says the time frame for the project is still a long one. “It will take a long time to design, to finance, and to complete the hotel, but this step was if it was a critical step forward. Gatehouse has been proactive in trying to make sure that the next steps move smoothly, working with construction companies and engineering firms and architecture firms and financing, to make sure that we can move as quickly as possible beyond this step. This is a big leap forward to making this vision a reality.”

Burnett says despite the length of time it took to reach the agreement, both the city and Gatehouse are ready to move forward on the project. “It’s a legal document, and it’s a long legal document, and it is an important structure for making sure that the city gets what it needs for the incentives that are provided for the project, and also making sure that Gatehouse has the confidence in the city performing on its incentives and its requirements.”

The city council will review the development agreement document at their meeting next Tuesday night, with final approval of the agreement slated for a council meeting in late July. Burnett made his comments as part of a social media posting by Mayor Bill Schickel.