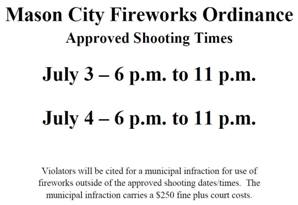 MASON CITY — With the 4th of July next week, Mason City residents are reminded of the changes in the city’s ordinances on the detonation and sales of fireworks. The City Council approved setting July 3rd and 4th between 6:00 and 11:00 PM as the only times that fireworks may be ignited in the city.

City Administrator Aaron Burnett feels the changes in the ordinance, along with a stiffer fine for violations, has helped reduce the number of complaints. “In general it feels like it has been successful thus far. I’m hopeful that it continues to be successful, and the police department is standing by to be the enforcement mechanism for that. It is a hefty fine for those who do violate it, but I think it is a good balance. Hopefully we’re able to keep things where it needs to be so that everybody can enjoy their 4th of July holiday.”

Burnett says the council had a good debate about the fireworks issue after getting public input.  “The council really struggled with this in trying to figure out where to end up, and I think they took an honest feedback from a lot of the community on figuring out to come to this conclusion. Does it make everybody happy? Absolutely not. I think that we never really find that perfect ground. Not everybody has the same opinion, but this was a really good process and I think it came out with a good conclusion.”

Part of the council’s decision was to make it a $250 municipal infraction for those violating the fireworks ordinance. Burnett says making it a municipal infraction makes it easier for the police to enforce.  “The police are going to aggressively enforce it because it needs to have some constraints. It was getting to the point where it was just out of control where I know my kids were woken up several times by fireworks. Luckily my kids are heavy sleepers so I was able to put them back to sleep, but you know for other people that can be a real problematic situation. We got to a good place here so hopefully people can enjoy them, but not create such a nuisance for everybody else.”

The council also decided to restrict temporary fireworks sales tents to the industrial areas of the community.

Burnett made his comments on the “Ask the Mayor” program on AM-1300 KGLO earlier today. Listen back to the program via the audio player below