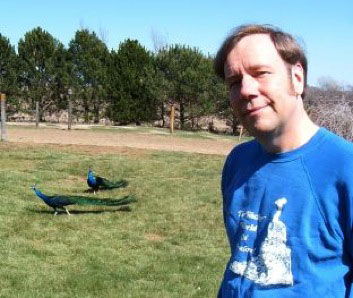 MINDEN — An alternative farmer in western Iowa who tends an apple orchard and raises peacocks and bees is appealing to state leaders to enact tighter restrictions on crop dusters who he claims destroyed much of his four-acre farm.

Dennis Fett, of rural Minden, says the problem with drifting chemicals has been going on for decades but last year was the worst. Fett says, “We’ve been on our property since 1987 and starting in 1992, we’ve been pretty much violated by drifting of unwanted farm pesticides, fungicides, insecticides and herbicides.”

Fett says he built a tall fence, which kept out most of the ground-sprayed chemicals, but then neighboring farmers started hiring crop dusters. In July of 2018, he says his property was oversprayed three times. “It pretty well destroyed all our fruit in our fruit orchard, it destroyed our chemical-free garden, and one of them violated the Bee Rule, spraying insecticides within a mile of a registered bee hive — which ours are,” Fett says, “and it also caused neurological problems and death of some of our baby peacocks.”

Fett says he’s appealing to Iowa’s secretary of agriculture as well as to members of the legislature to look at the rules regulating crop dusters and overspraying. Fett says, “If they look at increasing the fine structure, if they’re given a civil penalty from $500 to $1,000 or maybe even $5,000 or more, that might discourage these crop dusters who come from out of state and are here six weeks or so and leave — and leave their dangerous chemical on off-target places, such as my place.”

Fett says the state pesticide bureau has reported a 50-percent increase in overspraying cases during 2018. He says it’s baffling why more farmers aren’t raising a fuss about the problem. “The farmers are spending thousands of dollars to get their crops sprayed either for herbicides or insecticides, but when they’re drifting off target, like they have on my property, they’re not getting their money’s worth,” Fett says. “I’m proposing the farmers ask these people who overspray to give them all of their money back when they violate the law.”

Fett says he’s very concerned about the coming spring and the potential spraying around his acreage of the chemical dicamba, which may kill anything left on his farm.