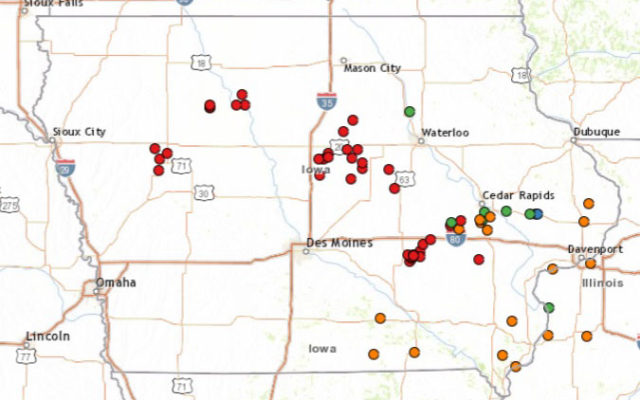 JOHNSTON — Tornado warnings were issued for parts of our listening area last night.  We may never know just how many tornadoes touched down on Iowa soil last night, but there may have been between ten and 20.

Chad Hahn, warning coordination meteorologist at the National Weather Service in metro Des Moines, says most of the twisters were minor and were on the ground one-to-two minutes, while a total of 15 tornado warnings were issued statewide. “Numbers are going to be difficult at this point to get a really firm number on just how many of these short-lived tornadoes, a lot of them occurred over open country,” Hahn says. “There’s only a couple of damage reports that we’ve received from at least two tornadoes.”

The two that caused damage were near Iowa Falls and Montezuma. One person was injured by a possible tornado near Barnes City, which is about eight miles from Montezuma. While another National Weather Service official told Radio Iowa there were “at least ten” tornadoes overnight, with up to 20 possible, Hahn says it would be “guessing at best” to try and pin down a figure until more study is done.

He says they won’t be sending out teams in an attempt to verify each and every tornado. “That’s not something that we do, it’s not a good use of our resources,” Hahn says. “Our main job after a tornadic event is to assess damage in order to rate a tornado. To see how strong the winds are, we have to look at the damage pattern in order to do so. If it doesn’t cause any damage, of course, we are unable to do that.”

It may be a few days before the experts are able to collect all the data they need to get an estimate on the number of tornadoes. “Some of this information we collect from satellite information after the fact,” Hahn says. “If it occurs over open farmland, typically there will be some sort of a damage pattern, particularly when the corn and soybeans are taller, we can get a better idea from satellite and we can use that to assess damage. Of course, early season. Not a lot out of the ground yet.”

Adair County authorities say a tornado touched down on May 22nd near Adair, killing 74-year-old Linda Brownlee and injuring her husband. It was Iowa’s first tornado death since 2014. Nationwide, 38 people have died in ten tornadoes this year.