JOHNSTON — Governor Kim Reynolds announced her selection of the next leader of the Iowa National Guard at a news conference Tuesday at Guard Headquarters in Johnston.

“Today I am pleased to announced the appointment of Major General Ben Corell as Adjutant General of the Iowa National Guard,” Reynolds says. General Correll is an Iowa native who will fill the spot left open by the retirement of General Tim Orr.

“General Correll is a native of Manchester, Iowa and a grew up in Strawbery Point,” Reynolds says. “General Correll brings a wealth of command experience, a lifetime of commitment to the guard, and the highest level of integrity to this critical role.”

Corell recently returned from a deployment to Kuwait where he commanded the 34th Infantry Division “Red Bulls” in support of Operation Spartan Shield.  “I am humbled, I am honored by your appointment to server as the 27th Adjutant General of the Iowa National Guard. I assure you I am well prepared to lead the Army and Air National Guard forces of our state,”: Correll says. “I will ensure that our soldiers and airmen are always ready to meet federal mission requirements when we are called upon. In addition, I will ensure that we are trained and prepared to respond to the needs of our fellow Iowans when called to assist in the event of a natural or man-made disaster.” 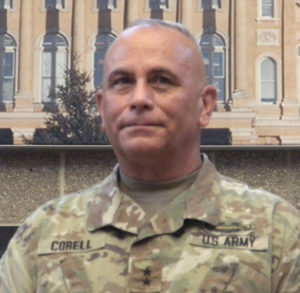 Correll has commanded at every level of the Iowa National Guard, most recently that command of the 34th “Red Bull” Infantry Division from September 2017 to August 2019. He previously served as the deputy commanding general-maneuver for the division, and from June 2016 to September 2017, Corell served on active duty as the deputy commander, NATO Multinational Division Southeast, in Bucharest, Romania. He has been deployed overseas six times since 2000.

“I know that I have been given the privilege to lead some of the best soldiers and airmen our country has to offer. I know because I have served alongside them,” according to Correll. “I’ve led them in combat in both Iraq and Afghanistan. I’ve served with our young Iowa men and women representing our nation in many places around the world — and around our state in times of floods, tornadoes and snowstorms.”

Correll got emotional as he thanked his wife Beth for supporting him during his time in the Iowa Guard. Two of sons Wade and Tyler attended the announcement, while a third son, Travis could not be at the ceremony. All three are soldiers in the Iowa Guard.

Correll has one key as he takes over. “Readiness is the focus. I understand when I say readiness that it is a broad category. It is training, it’s recruiting and retention. It’s bringing Iowans from all walks of life to be a member of the Iowa National Guard in some capacity. That’s my focus,” he says. “I don’t think that has change from the previous adjutant general and probably the one before that.”

He says the requirements for soldiers have changed dramatically for the Iowa National Guard since he entered the organization during the cold war era. Correll says that has made a difference in recruiting new soldiers.  “I think it is more challenging because of the demands. When it’s not just the one weekend a month, and two weeks a year. There’s education requirements that go with that — it’s the professionalism of the organization — it puts more demands on our individual members. Especially traditional members who have a full-time job somewhere else in the community.”

General Correll says he can addresses the issue with leadership. “Yes, it’s more of a challenge. But I think we’ve got to communicate — but I think the understanding today is a little bit different than when I enlisted as well, just by the use of the served components today,” Correll says.