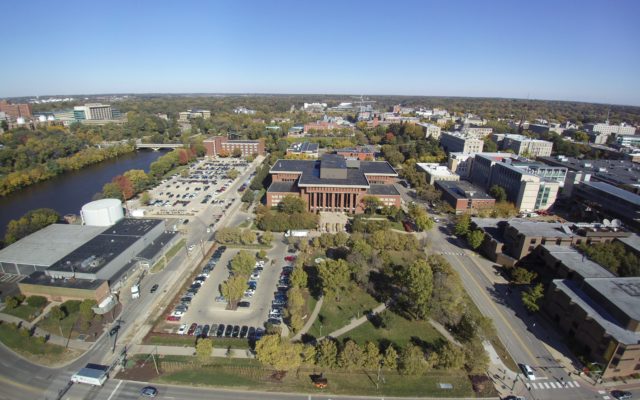 IOWA CITY — Ground is being broken this afternoon on the new Museum of Art at the University of Iowa, after the previous museum was inundated by floodwaters in 2008.

Museum director Lauren Lessing says the site for the new 63,000-square-foot facility is now a parking lot on much higher ground, across the Iowa River, near the UI’s Main Library and beside Gibson Square Park.

“Like most of the campus, we will still be on a flood plain but we are on a footprint that was high and dry in 2008,” Lessing says.

The new site will place the $50-million museum in an area of campus that will get significantly more foot traffic, “right in the thick of things,” she says. More importantly, Lessing says precautions are being taken in the event Iowa City is ever besieged by a deeper flood than the record 2008 disaster.

“They have designed a building with an underground parking garage,” Lessing says. “That parking garage would have to fill with water before a flood would even reach the first floor. The art is stored on the third floor of the building and so, it couldn’t be better designed to keep our treasures safe.”

The new museum will host exhibitions from the museum’s collection as well as traveling exhibits, and provide space for study, research and storage of artwork. Lessing says it will enable the University to house its tremendous collection of 16,000 works of art in one place. While exhibits will be rotated frequently, she says the goal is to make the art museum function more like a library.

“If you’re really interested in seeing some prints by Goya and they don’t happen to be on view, you can email us — there’ll be a form on our website — and request to see those items,” Lessing says. “We will bring them out into those classroom spaces for whoever wants to see them, because we belong to the state of Iowa. We really are everybody’s art collection and we want to make sure that people can see what we have.”

One of the UI’s more famous works of art is “Mural,” at eight-by-20-feet, Jackson Pollock’s largest-ever painting. Valued as high as $150-million, the huge piece was rescued minutes before the old museum was flooded. It will have a place of prominence in the new facility, and Lessing says anyone who attends today’s 3 PM groundbreaking will be able to help make their own “parking lot Pollock.”

“We want to be able to mark the spot where the bulldozers will be coming and working a bit later in the summer,” Lessing says. “You’ll have an opportunity to use a chalk-filled water balloon and we’re going to create a community composition that will look very much like one of Pollock’s later drip paintings.”

Construction is expected to begin in July and the new art museum should open in the summer or fall of 2022. It is the final structure to be rebuilt on the UI campus in the aftermath of the 2008 flood. The original art museum, built 50 years ago this year from poured-concrete, will become a new home for dance performance and dance practice.