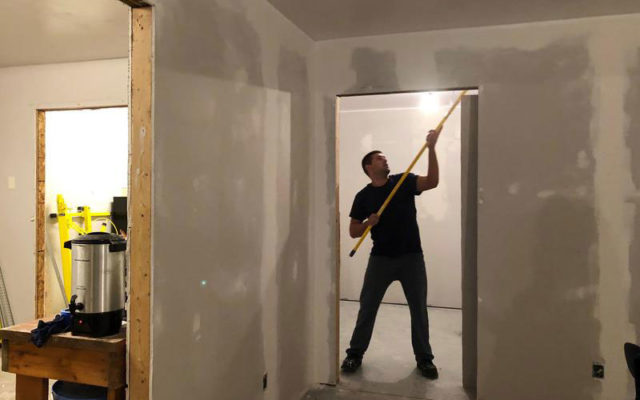 Joshua Goemaat is one of the first inmates at the Newton correctional facility who’s learning to build houses for low-income families across the state. “This is a great opportunity. It’s something different than what you’re used to,” Goemaat says. “A lot of people do this on the streets, I do this on the streets. To have an opportunity to do it in here — it’s great.”

Inmates will build three-bedroom houses in Newton to be shipped to communities that need affordable housing. Newton’s acting warden Jeremy Larson says Goemaat and others in the home building program can get formal training to become carpenters, electricians, plumbers and general laborers.

Iowa Prison Industries will oversee construction and sell the houses to a new nonprofit that’ll decide where to put the houses and how much they’ll cost. The first completed houses will go to Marshalltown, which was devastated by a tornado last year. Lance Henning is a Homes for Iowa board member and president of Greater Des Moines Habitat for Humanity.

“When you get farther into some of the rural areas, there’s not even the builders to be able to put those units in place,” Henning says. “You start thinking about spreading out 100, 150 of these across the state each year, it will start to make a significant difference.” Only four houses will be built this year as Iowa lawmakers didn’t provide enough money to fully launch the program.

Iowa Prison Industries director Dan Clark says the goal is to eventually have about 100 men, including medium-security inmates, working on a ten-acre, fenced-in site.  Clark says, “I think once there’s real houses here and people are able to come and see the quality of the home, and the impact it has on the men that are here, and the impact it has on the family that ends up buying the home, I think there will be a lot of support for the program.”

It’s modeled after an initiative in South Dakota, where inmates have built more than two-thousand homes over the past two decades. Corrections officials believe Iowa will become the only other state with a large-scale prison home-building program.